Bangkok, Thailand -- Beam Atchimapon is already three days late for the new school term in her native city, the Thai capital of Bangkok – but for a good cause. 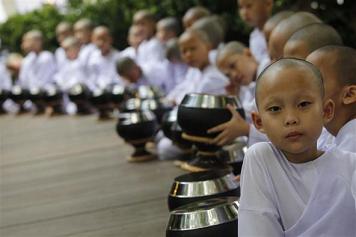 << Novice Thai nuns are seen before they receive food from people during the Songkran festival at the Sathira-Dhammasathan Buddhist meditation centre in Bangkok April 13, 2011. REUTERS/Sukree Sukplang

The nine-year-old is part of a small but growing group of Thai girls who choose to spend part of the school holiday as Buddhist nuns, down to having their heads shaven.

The temporary ordination of young men has long been part of Thai culture, with men spending a few days as monks and returning to their normal professions after time at a monastery.

But the ordination of “mae ji” or “nuns” is less common, and the idea that women should not play an active role in monastic life still prevails among more conservative Thais.

Fully ordained Buddhist nuns are not legally recognized, as they are in Myanmar and Sri Lanka – one sign of the inequality women still face in certain fields in Thailand.

“Thailand does not fully recognize the role of Buddhist nuns,” said Sansanee Sthuratsuta, a nun and founder of the Sathira Dammasathan center, a learning centre on the outskirts of Bangkok that is something of a green oasis.

Sansanee used to be a celebrated television personality in Thailand but gave up her fame for life as a nun 35 years ago. Her centre allows men and women to come and practice meditation, learn yoga and take part in retreats, part of its mission to make Buddhism an integral part of peoples’ lives.

She started the ordination of young nuns 3 years ago to raise awareness of nuns in the nation, where their role as spiritual leaders takes a backseat to their male counterparts.

“Nuns need to be educated. This is more important than a law that elevates the status of nuns in Thailand. If society can rely on nuns then they can be spiritual leaders,” she said.

This year, to celebrate 2,600 years since the Buddha gained enlightenment, the center arranged for the ordination of 137 women between the ages of five and 63.

The ordination involved shaving their hair off and living as a Buddhist nun for 20 days, including going on rounds to collect alms from worshippers at dawn, wearing simple white cotton clothes, and daily meditation classes.

The act of shaving their heads teaches the children to not hold on to impermanent things, Sansanee said.

"When we shaved off their hair the girls just said 'Take it off'. They are not embarrassed," said Sansanee. "None of these children were forced to come here. They volunteered."

The "mae ji noi" or "little nuns" are not from troubled families or poor backgrounds. The girls ordained at the center come from middle class Thai families that believe a religious education can enhance their child's formal education.

"My mother told me about it but I wanted to come here," said Beam, who attends a international school. "We are taught about the environment and about the Buddha."

The girls wake before sunrise, and finish their day with evening meditation at 6 p.m. The strict schedule is an impressive undertaking for the children but they take it in their stride, displaying a discipline beyond their years.

"Life is not just about finding money. It's about being useful to society and contributing in a positive way," said Sansanee.

Not all the time is spent in serious pursuits.

During one outdoor lesson the youngest nun Ploy, 5, ties two leaves together with a hair band and plays a shadow puppet game in the sun.

"Look! It's a rabbit!" says Ploy, to the amusement of her teachers.

The girls' parents feel the experience is more than worth it for what their daughters gain.

"My daughter has ordained for the second year. She is a more thoughtful child and she is doing very well at art in school now," said Karun Sribumroong, whose daughter Pim is eight. "Her time here made her even more creative and imaginative."