In Thailand Today, Teen Monks Express the Spirit to a Rock

Thailand's Buddhists are a bit annoyed with today's young monks. As mobile phones and other devices grow more popular, it's becoming harder for religious leaders to control the images of Buddhism in the media and marketplace. WSJ's James Hookway reports.

BANGKOK, Thailand -- Each year as monsoon rains sweep their way over Thailand, tens of thousands of teenage boys shave their heads and are ordained as Buddhist monks in a traditional rite of passage. 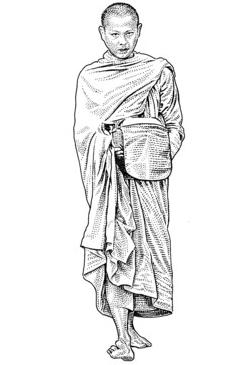 Some find their life's vocation during the few weeks they spend in the monastery, and they become full-time monks.

Others post videos of themselves on YouTube, as they play air guitar to hard-rock tracks like Yngwie Malmsteen's "Iron Clad," or recite religious chants to thumping hip-hop beats.

The Buddhist faith practiced by more than 90% of Thailand's population is going through something like culture shock as the country quickly modernizes alongside East Asia's other booming economies. With more Thais going online, often through mobile phones, some of the country's novice monks are becoming online media stars, jarring an older generation that doesn't quite know what to make of it all.

"Technology is advancing very quickly and we can't keep up," said Phra Kasem Sanyato, secretary of the Buddhism Protection Center of Thailand, a watchdog for religious affairs.

"The younger generation is losing respect," added 48-year-old Pornpun Kaewbundit, as she emerged from a temple in Bangkok's historic old town recently.

Besides rocking out to Mr. Malmsteen, who was born in Sweden and lives in Florida, some monks film themselves playing pranks on other novices or shouting out lyrics to the likes of Thailand's heavy-metal band Bodyslam. They often use deodorant sticks or whatever else is at hand as stand-ins for microphones. Brooms often double as guitars.

A June 30 demonstration in Bangkok asked for more respect for Buddhist traditions.

The clips are quickly becoming a genre of their own on YouTube and other sites, with some users taking one clip and remixing it with fresh backing music. The result: mash-ups of monks with shaved heads cavorting about in wigs to Dead or Alive's 1980s hit "You Spin Me Round (Like A Record)."

Monks old enough to know better are getting caught up in the excitement, too.

Phra Klairung Rujidhammo was recently catapulted to national fame when he was filmed performing suggestive dance moves, known here as coyote dancing after the film "Coyote Ugly" set in a New York dance-bar. Phra Klairung, a chunky temple secretary in his mid-forties, quickly apologized after the clip went viral, explaining that he was trying to cheer people up after flooding hit the area around his temple in northern Bangkok.

His superiors gave him a two-week suspension, and Phra (Phra is a religious title) Klairung is back collecting food offerings and other alms from the local community each morning.

Some Thais, though, fear that the Buddhist clergy's standards are slipping. They are urging Thais to be a little less tolerant than the country's image as a magnet for night-clubbers and sun-seekers might suggest.

Bangkok jeweler Acharavadee Wongsakon, for instance, on June 30 led a procession of several hundred protesters through the city's famous Chatuchak weekend market and the Khao San Road backpacker district to persuade Thais and foreign tourists to show more respect. That includes avoiding getting inked up with Buddhist tattoos.

Accompanied by ornate floats and banners saying "No" to the Disney movie "Snow Buddies," which features a dog named Buddha, Ms. Acharavadee silenced the normally raucous backpackers who frequent the area as she and her followers made their way past bars with names such as Lucky Beer and the Lava Lounge.

"I think they have a point," whispered 23-year-old Carla Bennett from Canada, who was getting her hair braided at a street stall at the side of the road. "Maybe they are tired of people stomping over what they believe in."

During a breather between parades, Ms. Acharavadee complained that some Thais regard Buddhism as little more than a detail listed on their national identity cards. "The Internet is compounding the problem. People are spending less time studying Buddhism, and they are missing its message," she said.

Another source of worry in religious circles is the fact that Thais are having fewer children than they used to as more families move from farms to the country's cities. Thai women now have an average of 1.5 children, down from more than six in the 1960s. That means fewer teenagers are ordained as novices. All Thai Buddhist males generally get ordained at some point in their lives, though most often in their teenage years and sometimes earlier.

Some Buddhists are fighting fire with fire by turning to reality television shows and the Internet to revive interest in Buddhist teachings. Thai cable network True Corp. this year began airing a live, rolling documentary about the lives of nine novice monks ordained at a temple in eastern Bangkok. Snappily titled "Novice Monks Cultivate Dharma Wisdom," it was a surprise hit.

One fan, 64-year-old Wallapa Chairat, says she gets up at 5:30 each morning to watch the young monks go around collecting alms. One day she got out of bed at 4 a.m. and left her house in Nonthaburi province near Bangkok to offer food to the young monks herself.

"The news programs and soap operas are full of angry people who are jealous and fighting," Ms. Wallapa says. "But the little monks provide peace and happiness."

The young monks seemed to enjoy it, too. "I think living in the monkhood is the best thing I've ever done in my life," 9-year-old Theerapath Suthipatharapan told the show after his stint in the temple was up. Unlike other reality shows, the monks aren't voted out by the audience.