The Crisis in Thai Buddhism

BANGKOK, Thailand -- If Thai Buddhism has been corrupted and lost its way, as critics are alleging, you would never know it by talking to Mod and her friends, whose devotion keeps them making merit and seeking solace at Wat Tha Mai, one of Bangkok’s scores of Buddhist temples, every weekend. 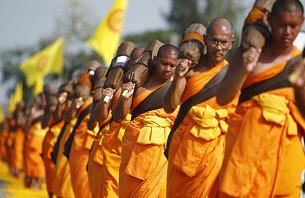 << Buddhist monks participate in a procession to mark the 2,600th anniversary of the enlightenment of Lord Buddha on the outskirts of Bangkok on Jan. 4, 2013. (Photo: Reuters)

It’s still morning but the heat in Bangkok is already oppressive. Yet that doesn’t seem to deter large numbers of worshipers from turning up at Wat Tha Mai on their day off from work. The smell of incense and smoke are part of a palpable, chaotic atmosphere as people mill about, determined to donate their way into the good graces of some higher power.

Mod - her nickname means “Ant” in Thai - is typical of the people who come to the temple. An accountant in a prestigious international firm, she has come this morning to make merit so that “things might be better as it had been a rough start to the New Year.”

As Mod darts from one donation box to the next she pauses to slip 100 baht (US $3.35) into a box placed before a statue of the elephant god Ganesha. When pressed on the significance of the Hindu deity in a Buddhist temple, she struggles to place him in a Buddhist context but agrees with her friends nevertheless that he is holy and we should not question such mystical things. Ganesh is actually a central figure in Hinduism who broke off his right tusk to use as a quill to write the Mahabharata and subsequently the Baghavad Gita.

Mod’s experience that morning is emblematic of the admixture that is Thai Buddhism—made up of equal parts animism, Buddhism, Hinduism and plain superstition. But many, including the group known as the Forest Monasteries, lament the state of Thai Buddhism as being corrupt, power hungry and as dirty as the rest of the country. A series of scandals has turned up recently, including senior monks sexually abusing their novices. Many monks have been accused of the commercialization of the faith including fraudulent fund-raising.

The Thai Forest monks are known for their orthodoxy, conservatism and asceticism. They model their practice and lifestyle on those of the Buddha himself and his early disciples, keeping alive the practices of the historical Buddha, who frequently dwelt in forests, both during his spiritual quest and afterwards.

“How can we hope to have a good country when not even the religion is pure?” a member of the group told Asia Sentinel. “Some of what these monasteries are teaching is not even real Buddhism!”

At the central building in the temple where Mod worships, people have been waiting since before dawn to get their time before the abbot. Many have come from far and wide with various requests and ailments. Some pay with whatever meager savings they have for the chance that some miracle might cure their ailing son, daughters, mothers and fathers. Others are willing to drop seven-figure donations to get what they want.

Between accepting donations and chanting ancient Pali incantations that many in the congregation don’t understand, the monks thumb at their cell phones or ask their personal attendants to grab them refreshments.

Corruption within the Thai clergy has not been an uncommon or even recent phenomenon. In 1999, The Associated Press carried a story stating: “At its core, Buddhism is a religion that teaches the renunciation of desire for material comforts is the way to relieve suffering and find the path to wisdom. But instead of shunning material comforts, some senior monks live in plush quarters and drive Mercedes Benzes.”

Blessing public buildings—and even the occasional airplane—by throwing water on them in return for donations is not a part of Forest Monasteries religious practice. It occurs nowhere in the Tipitaka, the sacred Buddhist texts.

While real Buddhism might be a theological debate best reserved for another time, Thailand has caught the global headlines with a few unique Buddhism-related stories. The first came on the heels of the death of Apple mogul Steve Jobs when the Dhammakaya sect made a special television broadcast and claimed they have found his soul and presence in heaven.

They later went on to claim that Jobs had been reincarnated as a “divine being with special knowledge and appreciation for science and arts in some Utopia. In this Utopia he is around 35-40 years old with a head full of hair. He serves a role as a mid-level warrior philosophy and lives in a celestial palace.”

It should be noted that the Dhammakaya sect is one of the fastest growing groups in Thailand and currently holds widespread public appeal. Its supporters number in the hundreds of thousands and it has temples around the country and the world.

The Steve Jobs story is not the only one that has gained international recognition. Every year millions of Thais buy lucky charms and amulets that are supposed to help in their everyday life. One story that garnered international press was the presence of amulets and tattoos blessed by monks, which hold special properties such as rendering the wearer bulletproof.

Many swear by the amulets, with some even claiming to have witnessed such tests first-hands. But when pressed to offer more proof the seller told this writer that it was illegal to try it out on people although he has many eyewitness friends. An independent test a few years ago by a reporter resulted in a very dead chicken with the vendor then claiming it only works on humans.

Regardless, these amulets and tattoos are amazingly profitable with bulletproof ones going for as high as 300,000 baht (around $10,000).

But while the international headlines may focus on the sensational aspects of Thai Buddhism, the local Buddhist supreme council has come under increased scrutiny and criticism after a period of sex and corruption scandals. Under the Buddhist canon, monks are not allowed to engage in sexual relations because it brings with it attachment and desire which leads to suffering.

Local Buddhism has even taken a page out of the Catholic playbook recently with several monks embroiled in legal battles for having abused their novices.

And while many Thais feel disillusioned about the way some of the Sangha, or monastic community, has behaved, many are reluctant to speak out. It is taboo in Thai culture to do so. Mod articulates this point.

“We were taught from a very young age that it is okay to not believe but it is not okay to disrespect. While we may not approve of certain things that monks do, they do not represent our religion as a whole. We are Buddhists and we know what we believe.”

As she makes her way with her friends to the central building where she will queue with countless other people looking to make their fortune through the purification of their karma, that point has never been clearer.