Bangkok, Thailand -- A decade or so ago, an official letter of warning from the Police Special Branch Division landed on my desk. It was about an article by a physician-turned-monk entitled "How the Buddha died" in the former Outlook section I was working on back then. 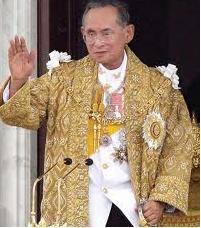 << In Thailand, insulting the King is punishable by up to 15 years in prison

The article tried to diagnose the Buddha's illness based on evidence in the scripture. It was deemed a national security threat because it had the nerve to describe the Buddha in his last days as a sick old man.

The message was clear: "Don't ever do it again."

My first reaction was anger. I consider myself a devout Buddhist. Me offending the Buddha? The article was penned by a monk scholar Mettanando Bhikkhu who had left a life of wealth as a physician to become a monk. Him offending Buddha?

Come to think of it, the guy who signed the letter probably couldn't care less because the matter ended there with no further harassment. Someone or some groups of people might have been angry to see the revered Buddha being discussed in less-than-holy terms.

So the police were petitioned to prevent us from destroying Buddhism. So, the police had to send us a letter to show that they were doing something.

It didn't work that way with Mettanando Bhikkhu. The elders despised him for being critical of the clergy's lax monastic discipline and dictatorial rule, and for his support for Bhikkhuni ordination. He was refused permission to have a passport and any temples he was staying at were forced to expel him. He finally left the monkhood.

Muslims who use violence against those who violate their beliefs are often called extremists or fanatics. But what about Buddhists who do the same? Do they have the right to call themselves protectors of Buddhism?

In the same vein, what about the people who call themselves protectors of the monarchy and do not hesitate to crush those who say or do things that violate their perceived taboos?

I consider myself a royalist. Like many Thais, I view His Majesty the King not only as a dedicated monarch but also a respectable person on a spiritual pursuit in line with the concept of divine kingship. I know this is irrational; but I still like to believe that there is something sacred and noble left in my world. It makes me feel good to be associated with some form of grace.

However, I don't agree with the draconian lese majeste law and the abusive use of it for political ends. The monarchy is based on compassion.

For me, the best way to protect the monarchy is to amend the law to prevent abuse of it and for it to meet international standards. Am I still allowed to be a royalist?

The reason I'm writing about Buddhism, Islam and the monarchy together is they all function within a system of faith. For many Thais, the monarchy is not a political institution, it is their faith.

In a society marked by cultural and religious pluralism, we should observe a code of conduct concerning our association with other faiths to avoid misunderstandings and violent conflicts. Vulgar language is a no-no. So are falsehoods, half-truths and the use of religious symbols in a disrespectful manner. Whether you share a faith in the monarchy or not, this code of conduct still applies.

The big but, however, is that the responsibility to avoid conflicts rests with the faithful more than the critics of their faiths.

More often than not, things turn ugly when the faithful begin to see the object of their respect as an extension of self and feel hurt when it faces criticism.

Since most who proclaim themselves as protectors of the monarchy are Buddhists, they should realise that as Buddhists we are responsible for our own actions, or karma, which are our reactions to external events.

Our task as Buddhists is not to react negatively or positively to what we hear, see, taste, smell, or feel, but to ensure equanimity at all times with the constant awareness of anicca (impermanence) and anatta (non-self).

For example, the Buddha did not react to vulgar allegations that he fathered a child. Instead, he would allow the truth to reveal itself.

Buddhism teaches not only tolerance but also cautions against forced and blind obedience.

His Majesty the King also constantly encourages us to return to basic Buddhist values such as tolerance, self-reliance, simplicity and compassion.

Is the desire to crush critics of the monarchy a Buddhist thing to do?