Bangkok, Thailand -- Critics say that, by ordaining as a monk, a celebrity transvestite is using the religion for selfish reasons, but, like everyone else, he has the right to seek solace in the temple 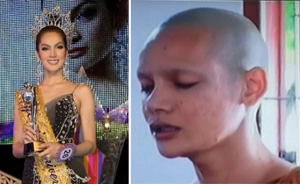 << Sorawee, from drag queen to monk

One key argument against the decision by a former Miss Tiffany to become a monk is that he may be doing so to escape personal problems or send someone a statement. In other words, he may not be seeking the kind of spiritual peace that those seeking ordination are supposed to. Religion, critics of Sorrawee "Jazz" Nattee say, is neither a hiding place nor a means of revenge.

Sorrawee, who never underwent gender reassignment, was quietly ordained recently after having his silicone breast implants removed, only for the fact to emerge as headline news in the Thai-language media.

The criticism levelled at him might have greater weight in a society where monks are not caught drunk or sleeping with women on a regular basis. The truth is that the Thai monkhood is far from being a pure sanctuary, and there are monks whose conduct deserves more scrutiny than Sorrawee's.

More truth is that Sorrawee is simply exercising his religious freedom. It is irrelevant that he was crowned Miss Tiffany in 2009, dressed in women's clothes. Buddhist history has examples of monks with more controversial backgrounds. Among them was one well-known Angulimala, a killer who was redeemed by his conversion to Buddhism.

Sorrawee had been frequenting temples before his decision. He also consulted many people before deciding to be ordained. It was clearly not a knee-jerk decision made in the heat of the moment. And even if it had been, why should we blame him? One way or another, people turn to religion because they believe they are facing problems that cannot be resolved in the lay world.

Some have predicted that Sorrawee's time in the monkhood will be short-lived - a quick in-and-out way of seeking religious solace. They say Sorrawee will be out of the monkhood in no time if the worldly situation that drove him there in the first place suddenly improves. Again, even if that turns out to be the case, religious freedom tells us that he has every right to try the spiritual peace of Buddhism. This religion is supposed to offer comfort during hard times and does not hold anyone in a firm grip. It's fine if you want to spend the rest of your life in a Buddhist sanctuary, but it's also fine if you just want to give it a try.

That women can only become "nuns", not monks, has been a focus of criticism where Buddhism is concerned. This must continue to be an issue that invokes constant debate and open-minded analyses. But by and large, Buddhism is generous, compassionate and encourages questioning.

Buddhism has not been free from exploitation. There have been sects or cults that preach that, the greater your religious donations - meaning money - the greater your chance of going to "Heaven". True students of Buddhism know within their hearts, however, that such teaching is not the religion's true essence.

If there are threats that might undermine Buddhism as Thailand's main religion, then they are represented by this kind of wayward teaching, not people like Sorrawee becoming monks. He, in the saffron robe, only represents the religion's openness and ability to offer peace and comfort. Whether he will "succeed" or "fail" will be of his own accord. No misguided "principles" will emerge to influence him while he is in the monkhood.

Despite the undeniable flaws of the Thai monkhood in general, Buddhism's real essence has been unwavering since the day the Lord Buddha proclaimed the religion. If Sorrawee really devotes himself to Buddhist study as a monk, he will find that many things that he takes as his are not really his. He will be able to look back at his time as Miss Tiffany with a new perspective. He will learn that the memory of it is part of his journey and is nothing to be ashamed of.

That is the charm of Buddhism. No matter who you are, where you come from or what you have done in the past, the door to the "try-out" room is always open, and you can check out any time if you don't like it. All you need is the sincere will to look inside.