Bangkok, Thailand -- Today, as Buddhists around the country celebrate the Visakha Bucha Day to mark the Buddha's birth, enlightenment and death, it is worth reflecting on his teachings and recalling his advice on how best to continue his spiritual legacy. 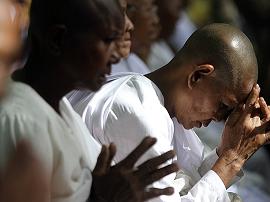 << Maechis (nuns) paying obeisance to Buddha in Bangkok. Can modern Buddhism lift society out of its social ills?

This reflection may also enlighten us about how and why predominantly Buddhist Thailand has become deeply entrenched in social injustice and political violence, instead of peace and compassion.

On the full moon night of the sixth lunar month when Prince Siddhartha turned 35 - six years after he had left the palace's comforts for a spiritual quest - he finally discovered the key unlocking the door to inner peace. He thus became the Buddha, meaning the Awakened One.

He discovered how our minds work to us prisoners of our own thoughts, emotions and beliefs which blind us from the truth that everything is in constant flux, subject to change, interconnected, and void of what we believe to be "me" or "mine".

He also learned how to undo old mental conditioning and declared that anyone - regardless of race, class, ethnicity, or gender - has the potential to attain spiritual liberation.

Honouring equality and transcending social prejudice, the Buddha allowed men from all castes to be ordained - and also women. In his time, prostitutes and beggars were known to have attained enlightenment and the Sangha represented an egalitarian society governed not by feudal hierarchy but monastic discipline designed to support spiritual practice.

By directing monks to "journey on and help the masses", the Buddha's message is primarily one of serving the underprivileged.

Sadly, our present-day clergy is deep in feudal hierarchy while the elders live in a comfortable cocoon divorced from social reality and blind to social injustice. Monks' misconduct is rife and so is corruption within temples.

Society today faces complex challenges and the clergy must urgently make teachings relevant to the modern generation. Monks also need to dedicate themselves to the needy. That is not happening. The few monks who try to help often struggle alone without support from the clergy.

Like the clergy, society is experiencing a moral crisis. Buddhism cautions against hatred, anger and all forms of ill-speech ranging from lies to sarcasm. Yet hate speech has become a norm in our politically divided society rife with crime and vices.

Meanwhile, the country is notorious worldwide for human trafficking, exploitation of migrant labour, and ethnic prejudice. Many ask: Where is Buddhist compassion? Where is the Buddhist principle of non-exploitation. The answer: lost within ultra-nationalism.

Ultra-nationalism weakens compassion and connectivity and harbours prejudice against the hill and forest peoples, the stateless, migrant workers and ethnic Malay Muslims.

To observe Visakha Bucha, we attend temples, give alms to monks and pay homage to the Buddha's image. That is all well and good, but it's not enough. The highest form of merit, the Buddha said, is to practise the dhamma.

That requires us to ease our greed, anger and delusion, and to transcend all forms of prejudice. We must help the needy regardless of race and gender and resist exploitation. In doing this,

we can purify our minds and ease suffering in society. This is what we should be thinking about on Visakha Bucha Day.