The great men of Buddhism

Bangkok, Thailand -- ONE OF the most revered temples in Thailand, Wat Bovoranives Vihara marked the 100th birthday of His Holiness Somdet Phra Nyanasamvara, the Supreme Patriarch and its current abbot, last Thursday by throwing open the doors to a new museum that celebrates the lives of all six of its abbots. 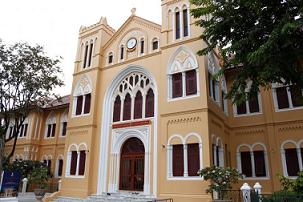 Bovoranives Abbot Library and Museum is located in a century-old, gothic-style building constructed during the reign of King Rama VI that has recently undergone massive renovations. The main hall boasts a video presentation on Wat Bovoranives Vihara, or Wat Bovorn as it's more familiarly known, while the upstairs is divided into six rooms, each devoted to one of the six abbots. A bronze statue of each stands proudly in the rooms, which exhibit their personal belongings and explain their significant works.

"This museum is not just for devout Buddhists," says Phra Soponkanaporn, head of the renovation office. "Four of the six abbots of Wat Bovorn were Supreme Patriarchs and worked closely with the royal family. The museum can serve as a source of learning about religion, politics, history and traditions."

Wat Bovorn is a first-class royal monastery on the northeast side of Bangkok's Ratanakosin island, just inside the old city wall bordering Bang Lumphu canal on Phra Sumeru road. It is particularly important, as it is where five of Thailand's monarchs spent their time in the monkhood.

The temple's history starts with the first abbot, Prince Mongkut, in 1836. He was ordained for 27 years, and was abbot of Wat Bovorn for 14 years, before ascending to the throne as King Rama IV.

"During his monastic life, King Mongkut travelled upcountry to learn about the people's lives, on which he based his visions for developing the country. He also manifested his interest in learning English by maintaining a good relationship with foreign missionaries. Thanks to his open-mindedness, the missionaries were allowed to introduce their religion in Wat Bovorn on the condition that they taught English to the monks and members of the public," Phra Soponkanaporn says.

King Mongkut invented the Ariyaka alphabet for the writing and printing of Pali to replace the ancient Khmer alphabet, which was considered too complicated. He based it on the Roman style and also set up his own printing house in Wat Bovorn to publish books in Pali using the Ariyaka alphabet. These took the form of Western-style textbooks and contributed greatly to the study and dissemination of Buddhism. His hand-written tracts in Thai and Ariyaka are on show at the museum alongside some of the books published in Ariyaka. Interest in the alphabet wanted after he left the monastic life.

King Mongkut was also interested in the study of astronomy and used his rudimentary astronomical tools to predict a total solar eclipse at Wa Kor sub-district in Prachuap Khiri Khan province on August 18, 1868. Some of the tools he used during ordinations at Wat Bovorn, among them an air pressure measuring tool and a mercury container are also on show.

Krom Phraya Pavares Variyalankarana was the temple's second abbot and the 8th Supreme Patriarch. He served from 1851 to 1892 and acted as the preceptor or Upajjhaya for King Rama V when he was ordained as a novice and again as a monk.

An important literary figure, he penned several poetry-style works in Thai on historical, archaeological and Buddhist topics, among them "Lilit Phongsawadan Nuea" ("Chronicle of the North") and "Rhythmic Passage to the City of Nakhon Si Thammarat".

"Krom Phraya Pavares was also an important scientist. He started studying science and astronomy about the same time as King Mongkut. He recorded the volume of rainfall for over 40 years by placing an alms bowl outside during each rainy season. The statistics he gathered allowed him to predict the weather," says Phra Wansan Julapo.

The museum is now home to his "Archive of Record Rain", his "List of Comets", the "Bhaka Kanana", which reveals the calculation methods used

for the lunar calendar dating back more than 300 years, as well as his book on Siamese cats.

The next room is dedicated to Krom Phraya Vajirayanavarorasa, a son of King Mongkut and the third abbot. He served from 1892 to 1921 and was the 10th Supreme Patriarch as well as preceptor of Kings Rama VI and VII when they became ordained.

As part of the national educational reforms undertaken during the reign of King Rama V, he was assigned the task of arranging education for people all over the kingdom. He laid the foundations for primary education in Thailand, using temples as schools, monks as teachers and the Mahamakuta Rajavidyalaya as the school for monks.

The textbooks he penned are on show together with his stationery and typewriter.

Krom Luang Vajiranyanavongse - the fourth abbot from 1921 to 1958 and the 13th Supreme Patriarch - was the preceptor of His Majesty King Bhumibol Adulyadej after his ordination in 1956 and was responsible for naming His Majesty's children.

The information kiosk in the room displays the royal ordination ceremony of King Bhumibol and some of personal effects of the monarch during his time a monk are showcased in a glass cabinet.

Krom Luang Vajiranyanavongse, a grandson of King Mongkut, was known for his simple and modest way of living. He collected no material possessions and only his wooden bed and a set of traditional medicine implements are on show at the museum.

The fifth room belongs to Phra Brahmamuni, who was abbot from 1958 to 1961. Although his time as the abbot was brief, the various duties he undertook were beneficial to the nation. He initiated the establishment of the Buddhist university, set up at the order of the Supreme Patriarch Krom Luang Vajiranyanavongse in 1945, and which is known as the Education Council of Mahamakut Rajavidyalaya.

His room boasts few personal belongings, except for a set of altar tables, a desk and the human skeleton he used during meditation to understand the truth of life - impermanence, no-self and nothing.

In 1941, Phra Brahmamuni started a meditation course for the public at Wat Bovorn, which continues today.

The last room is to celebrate the 19th and present Supreme Patriarch Somdet Phra Nyanasamvara, who during his 86 years in the monkhood has contributed greatly to the expansion of Buddhism both in and outside the country and has made Thailand the centre of world Buddhism.

He is well versed in both letters and practices and has written numerous textbooks, sermons, dharma verses, religious articles and exhortations, both in Thai and English.

He has also successfully disseminated Buddhism overseas through his dharma envoy project, which has seen the construction of the first Thai temples in Europe and Australia: namely Wat Buddhapadipa in London and Wat Buddharangsee in Sydney. In 2012, the World Buddhist Supreme Conference, along with the supreme Buddhist leaders of 32 countries, bestowed on him the title of "Supreme Holiness of World Buddhism".

His room boasts a mock-up of Somdet Phra Nyanasamvara's radio studio from which he broadcast a dharma programme via Dusit Palace Radio Station in 1968. The programme was initiated by King Bhumibol with the aim of bringing dharma teachings to the people.