Bangkok, Thailand -- A bus carrying worshippers home from a temple at the end of Buddhist lent plunged into a ravine in northern Thailand, killing 22 passengers. 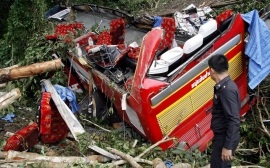 << Police inspect the wreckage of the bus in which 22 mainly elderly Buddhist worshippers were killed. Sixteen others were injured. Photo: AFP

The bus driver lost control of the bus before it fell 30 metres into the ravine on a winding rural road in Wang Nuea district in Lampang province on Wednesday. The driver was among 16 people injured.

The travellers had visited the temple to make merit, a Buddhist ritual of performing good deeds or other acts. Most of those killed were elderly women.

Lampang is a mountainous area 600 kilometres north of Bangkok.

Earlier this month 16 people, including a pregnant woman, were killed when the truck they were travelling in slammed into a tree in northeast Thailand.