Bangkok, Thailand -- In Thailand, the horrors of hell aren't just the stuff of kids' nightmares. Families can visit entire sculpture gardens featuring vivid depictions of what sinners face in the afterlife. 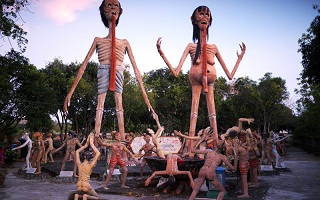 Attention all other religions, your hell is a tame paradise compared to the dark, bloody underworld of Buddhism.

In Thailand, gruesome sculptural depictions of the 136 fiery pits of Buddhist hell, known as Naraka, are scattered throughout the country in parks and gardens that serve as popular weekend attractions at which families can teach their kids morality lessons. Filled with stomach-turning, gruesome sculptures, each garden warns of what happens to those who defy the otherwise peace-loving religion’s tenets.

About an hour and a half from Bangkok, the Wang Saen Suk Hell Garden is the largest of the themed areas. Orange robe-clad monks from the adjoining Buddhist temple oversee the morbid sculpture park. But the real boss is the “Death King” Phya Yom, who weighs the record of each recently deceased human’s good deeds (which are engraved in his gold ledger) against their sins (which are scratched onto a piece of dog leather). If the bad overshadows the good, they are inflicted with the proper punishment for their crimes before being reincarnated and returned to earth.

Following a long tradition of artistic depictions of the underworld, these 3D Thai renditions of the punishment sinners can expect are absurdly graphic. Civilian adherents to Buddhism live by five religious precepts, which forbid murder, stealing, sexual misconduct, lying, and intoxication. Monks, meanwhile, must abide by 227 rules. Those who break them will pay in brutal fashion.

Near the entrance, two skeletal male and female figures who resemble “preta,” or, “hungry ghosts,” tower over the trees, mouths agape and tongues hanging to their hips. In Buddhist lore, they’re said to be the souls of greedy and jealous Buddhists who must roam the earth unable to satiate their hunger. Beneath them lie 21 humans whose heads have been turned into animals as punishment for various misdeeds. Some follow common folkloric themes: thieves are monkeys, liars are toads, and the corrupt are pigs. Others are more creative: arsonists become snakes, those who steal rice are birds, anyone who destroys herbs and useful plants are turned into goats.

Deeper into the garden, angry statues of men in orange loin cloths and tightly wrapped headdresses carry out punishments on a myriad of sinners, from the petty liars and adulterers to rapists and murderers (who have their organs torn out by birds or are hacked to death with machetes). Alcoholics are served boiling oil. A liar has her tongue pulled out by an oversized pair of pliers. A woman who had an abortion or took birth control is squeezed in a vice.

Amid the lushly forested area are endlessly grotesque displays of people with their skin torn off, sinners boiled in a bubbling cauldron, men and women hanging from holes in their cheeks, and nude deviants scaling a thorny tree while being attacked by wild beasts. The worst punishment is reserved for those who’ve injured their parents or a monk—they’re stuck in a pitch-black, ice-cold hole until a new Buddha emerges.

But it’s not all blood and guts. A sign at the garden’s entryway encourages planning ahead to avoid the hellish underworld: “If you meet the Devil in this life don’t postpone merit-making which will help you to defeat him in the next life,” it says. “Donate a little each day and you’ll have a happy life.” And toward the end of the garden’s sculptures, a small group of figures who adhere to the Buddhist tenets are shown being granted a karmic reward: a tree that grows anything they desire in their next life.

Elsewhere in the country, similar but smaller hell gardens can be found depicting the gore with different backdrops. One of the oldest gardens is in northern Thailand. The “Buddhist Learning Garden” at Wat Thawet was the work of one eccentric, very dedicated monk, who, starting in the early 1970s, spent two decades renovating the nearby monastery and crafting the twenty-odd sculptures of sinners undergoing various types of torture.

The lesson is clear: You can’t get away with your transgressions without paying your dues, but at least, according to Buddhist beliefs, you’ll get another chance in a subsequent life—so better luck next time, sinners.