Bangkok, Thailand -- Think Buddhist monk, and bodyguards and bomb threats probably don’t spring to mind. But that’s exactly what Phra Buddha Issara is dealing with as he mounts a campaign to overhaul Thailand’s religious institutions. 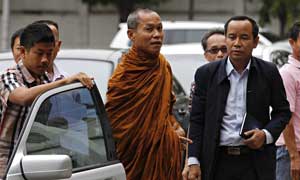 The activist monk has earned plenty of enemies since he launched a campaign to clean up Buddhism in Thailand, urging the country’s 300,000 monks to be more transparent in their financial dealings and the religion’s governing body, the Supreme Sangha Council, to crack down on wrongdoing.

Thai Buddhism, much like Thai democracy, is in a state of upheaval. “There is more open crisis in the Sangha than has been seen in living memory,” said Michael Montesano, a Thailand expert at the Institute of Southeast Asian Studies. “This is a crisis in yet another Thai institution.”

Monks have long been revered in a country where 95% of the population is Buddhist. They have their own fast-track lane at the airport and designated priority seats on the metro. But in recent months, there have been tales of monastic misbehaviour that would seem to belong in the most gossipy tabloids.

There have been monks with girlfriends (and boyfriends), drunk monks crashing cars, monks pocketing wads of cash meant for funerals and monks playing the stock market. And that’s not even mentioning the monks-on-meth or the selfie-snapping, Louis Vuitton bag-wielding, private jet-taking monk scandals of 2013.

Buddha Issara has been leading the charge against financial misconduct and says that, far from rocking another core pillar of Thai society, this is the perfect time to be overhauling religious institutions, too.

For the past year, Thailand has been governed by a military-led junta that has used ever more dictatorial powers to crack down on opposition politicians, human rights activists and the press.
Advertisement

“Since we are cleaning our house we should leave no dirt anywhere, we should clean every corner,” Buddha Issara said in an interview in an open-air pavilion at Wat Ornoi, his temple on the outskirts of Nakhon Pathom, a city vaunted as the place where Buddhism first flourished in Thailand.

A hardliner who upends the stereotype of the friendly, chuckling monk, Buddha Issara had a video camera recording the interview, while tattoo-covered men of uncertain role skulked around in the background. He supported the overthrow of the democratically elected but polarising prime minister, Yingluck Shinawatra, last year and is said to be close to General Prayuth Chan-ocha, the junta leader. With the military junta now cleaning up politics and the economy, it would be ill-advised to leave out religion, the monk said.

“We will be a bit more tired, but the whole house will be clean” if Buddhism is also overhauled, he said. “This is better than leaving some corners dirty. If we do that, the dirt will spread to the whole house eventually.”

Although scandals are hardly uncommon, Buddha Issara was incensed when the Sangha earlier this year cleared the abbot of Thailand’s largest temple of misconduct after he was accused of embezzling almost $30m. Because the abbot returned most of the money, the council ruled there was no wrongdoing.

Thailand’s 38,000 temples traditionally rely on donations from the faithful, receiving between $3bn and $3.6bn a year, according to a National Institute of Development Administration report.

Buddha Issara wants more transparency in donations so that these temples can be rid of corruption. He is calling on the military-led government to set up a new committee to control Buddhism’s coffers and last month filed a petition urging the National Anti-Corruption Commission to investigate the top two Buddhist institutions for fraud.

Don Pramudwinai, deputy minister of foreign affairs, said that “many in the government have concerns about abuses” in Buddhist institutions.

“We’d like to see that reform being taken up by [the monks] themselves, rather than be imposed by our side,” he said. “But this hasn’t yet taken off.”

The Sangha declined an interview request and did not respond to a written list of questions.

It is perhaps no surprise that this campaign has won Buddha Issara few friends, but the extent of his enemies’ wrath is something else. Gunmen wielding M-16 assault rifles last year opened fire on the temple compound, and the monk has received abduction threats.

Police guards now sit in a sandbag encampment at the entrance to Wat Ornoi, and visitors must be led along the banana-tree-lined roads of the compound by men on motorbikes.

“If I can let people know about the problems in the clergy that have been piling up for a long time and find solutions, I’m glad to do this, even if I die in the process,” Buddha Issara said.

Sulak Sivaraksa, an 82-year-old authority on Thai Buddhism, does not like Buddha Issara’s chances of success. “The fundamental teachings of the Buddha are that we should be transforming greed into generosity and hatred into loving kindness,” Sulak said. “But the new religions in this country are consumerism and capitalism. We have more Buddhist images than monks and all of these Buddhist images are for sale.”

Now, many Thai men become monks for the benefits – included a free university education. “To be a monk is a commitment to a noble life, they’re supposed to be better than ordinary people,” Sulak said in the garden of his house in Bangkok. “We give monks clothing and food and housing because we believe they are leading a better life. So if they misbehave we should chuck them out.”

But there was no “moral leadership” in the Sangha now, he said, so misconduct went unpunished.

Indeed, within the institution, Buddha Issara has little support. “I think this is just a human problem. We are living in society and sometimes in societies things go wrong,” said Anil Sakya, a senior official at Mahamakut Buddhist University in Bangkok, dismissing the suggestion that reforms were needed to weed out bad apples.

“Every country, every religion has good and bad people. Look at Christianity and all the bad Catholic fathers, look at the bad people in Islam. It’s not a religious problem, it’s a problem with certain people.”

Out in Nakhon Pathom, in the shadow of the tallest stupa in the world, the faithful also seemed unfazed by the increasingly lurid headlines. Ubol Wongrukthai, a retired schoolteacher who now runs a Buddhist meditation programme, echoed Sakya’s thoughts. “This is the result of individual factors, of people getting greedy,” she said. “Those people are not real monks, they’re just people wearing monks’ robes.”

But Sulak said it was inevitable that the religion would go through its own regeneration to deal with an increasing incidence of scandals.

“In Buddhism, we believe that things will die and will be reborn,” he said. “So in the future, maybe we will have fewer monks but better monks.”