NAKHON PATHOM, THAILAND -- On a rural road just after daybreak, villagers young and old kneel reverently before a single file of ochre-robed women, filling their bowls with rice, curries, fruits and sweets. In Thailand, it is a rare sight. 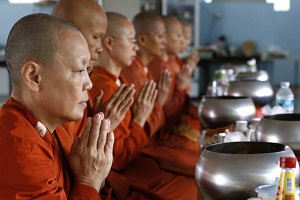 Thailand’s top Buddhist authority bars women from becoming monks. They can only become white-cloaked nuns, who are routinely treated as domestic servants. Many there believe women are inferior beings who had better perform plenty of good deeds to ensure they will be reborn as men in their future lives.

Yet with the religion beset by lurid scandals, female monastics or “bhikkhunis” are emerging as a force for reform, not unlike activists in the Christian world seeking gender equality including ordination of women as priests in the Roman Catholic Church. They are growing in numbers and appear to be making headway.

Thailand has some 100 bhikkhunis who were ordained in Sri Lanka, where women are allowed to become monks. They and their monasteries are not legally recognized in Thailand, and don’t enjoy state funding and other support the country’s 200,000 male monks are granted.

Living spartan lives, the women are governed by 311 precepts from celibacy and poverty to archaic ones like having to confess after eating garlic. Their ranks and those of hundreds of aspirants — there are five stages before ordination — include a former Google executive, a Harvard graduate, journalists and doctors, as well as village noodle vendors.

“It is our right, our heritage, to lead a fully monastic life. We are on the right side of history,” says Chatsumarn Kabilsingh, an author, former university professor and the first bhikkhuni in Thailand from the Theravada branch of Buddhism, which is dominant in Southeast Asia and Sri Lanka. Using her religious name of Venerable Dhammananda, she contends that the Buddha 2,500 years ago built the religion as a four-legged stool — monks, nuns, laymen and laywomen — but “we are now sitting on just three legs.”

The male-dominated religion has been blighted in recent years by crimes and gross violations of vows, just as widespread sex abuse and Vatican financial scandals have damaged the Roman Catholic Church.

Monks in Thailand have been convicted of everything from murder to wildlife trafficking.

Sexual depravity is frequently reported. One former abbot, fugitive Wirapol Sukphol, faces charges of drug use, money laundering, fathering a child by an underage woman and illegally amassing millions of dollars. A photograph shows him seated in a private jet wearing aviator sunglasses.

The Supreme Sangha Council, the religion’s ruling body, is under fire over the mishandling of corruption allegations against prominent abbots, including one of its own members.

The allegations include embezzling funds intended for the cremation of an abbot’s predecessor and the investment of $1.2 million from donations into the stock market.

With Buddhism so intimately tied to Thai identity — more than 90 percent adhere to the faith — these misdeeds and what is termed “checkbook Buddhism” have spurred calls in parliament for curbing the almost total authority the council wields over the clergy and the corruption-stoking $4 billion in annual donations to monasteries.

A proposed Patronage and Protection of the Clergy Bill will impose stiff penalties for those who break the religion’s cardinal rules and set up a panel to monitor donations. Corruption within Buddhism may also be dealt with in Thailand’s next constitution, now being drafted.

The role of women in Buddhism has also aroused national-level debate.

The Sangha council has urged the government to ban Sri Lankan clergy from coming into the country following what Dhammananda calls a “rebel ordination” in Thailand of eight bhikkhunis last November by Sri Lankans. That drew broad criticism of the council itself.

“The clergy can no longer insist on operating in a closed, feudal system that violates universal norms and values,” said an editorial in the English-language Bangkok Post.

Instead of trying to crush women’s aspirations, it said the “clergy should concentrate on cleaning up its own house to restore declining public faith.”

No scandal has emerged among Thailand’s female clergy. Dhammananda said she has seen no misbehavior in her monastery beyond a few nuns who had used their mobile telephones to excess.

“I think that many nuns see themselves as exemplary. They are, and they’re carving a new role for themselves that didn’t exist,” said Juliane Schober, an expert on Southeast Asian Buddhism at Arizona State University. “That that puts pressure on the Sangha doesn’t surprise me.”

Women clergy interviewed at three monasteries said it is essential to maintain a high moral ground so as not to give opponents an excuse to stop their movement.

Some cast them as Western-educated feminists out to undermine traditional Buddhism.

“They can be a force for change in Buddhism,” said Phramaha Boonchuay Doojai, a leading activist monk at Chiang Mai Buddhist College.

“If everything is in the hands of men, it is as if Buddhism was just the way of a father, not mother. But you need both,” he said. “Mothers have some unique feelings that men do not share. They may have more loving kindness.”

Proponents of ordination like Boonchuay say bhikkhunis originated with Buddha himself; the first was an aunt who raised him. Opponents argue that the lineage of the Theravada bhikkhuni order, under which women could be ordained, died out long ago and cannot be restored. The Mahayana branch of Buddhism practiced in East Asia has historically ordained women.

“We simply follow the rules. The ordination of female monks was allowed in the Lord Buddha’s time. But as time passed, the lineage of bhikkhuni disappeared,” Phra Tepvisutthikawee of the Buddhism Protection Center has said.

Despite conservative opposition, bhikkhunis are gaining ground with the general public in Thailand.

“It is a movement now. When I was struggling by myself it was just this crazy woman who wanted to be a monk,” says Dhammananda, who was ordained in 2003. “Now people don’t feel strange when they see a female monk in the streets. We don’t have problems with people, with society.”

Aside from spiritual pursuits, the 15 monastics at her Songdhammakalyani Monastery visit prisoners, aid the poor and infirm and maintain other links with the surrounding community near Nakhon Pathom in central Thailand.

Regularly they make alms rounds, a timeless tradition of food offerings by the faithful who are then blessed by the monks.

To the north, in the shadows of the country’s highest mountain, hundreds of civil servants, businessmen, villagers and others regularly flock to an idyllic monastery to hear talks by Venerable Nandanyani, a bhikkhuni and onetime mathematician. Families attend a weekend religion “camp” on the monastery grounds. A bhikkhuni leads a group of men and women in the slow motions of walking meditation.

Seated below a statue of the Buddha, the abbess energetically explains why ordination of women is vital, punctuating her words with thumbs-up gestures. It enables individuals to probe Buddhism’s depths and live the full monastic life, she says, and also allows intimate communication between female clergy and laywomen unhindered by the barriers of sex and traditional propriety between women and monks.

“We must wait,” she says. “Slowly but surely it will come.”