Bangkok, Thailand -- Amid heated disputes over who will become the new supreme patriarch, one thing is certain: whoever that may be, there is no way he can tackle the ills plaguing monastic society. 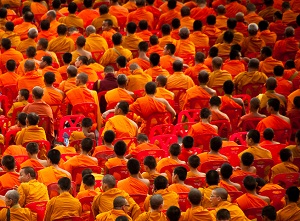 Regardless of who is at the top of the monastic hierarchy, it will be business as usual in the clergy. The commercialisation of Buddhism will continue unabated. So will temple corruption and monks' misconduct.

As long as the clergy's autocratic, feudal structure remains intact, the closed system will allow the elders to cling on to old centralised power despite ever louder calls for monastic reform. As a result, public trust in the clergy will continue to decline. Forget any hope for the clergy to become the voice of reason and universal morality under a new leader. We should be worried instead of the mainstream clergy's descent deeper into bigotry and ultra-nationalism.

Our country is threatened by ethnic discrimination, conflicts and violence. This calls for empathy and compassion. Monks should take the lead. Yet they opt for an us-against-them stance that fans public distrust and hatred of ethnic minorities. This is out of touch with the modern need for pluralism. It is also against Buddhist teaching in every way.

The current infighting in monastic circles over the appointment of new supreme patriarch actually mirrors Thailand's fierce colour-coded politics. On one side are the supporters of the wealthy Dhammakaya temple, known to be close to the Shinawatras. On the other side is not only the anti-Shinawatra camp but also those who see Dhammakaya as a cult that has distorted the Buddha's teachings to increase its wealth. Its systematic infiltratration into the Sangha Council since its conception is viewed as a calculated move to increase its power.

Let it be clear; I am no fan of Dhammakaya. But its strength is based on the weakness of the clergy itself. Buddhism teaches us to let go of material possessions and all forms of mental attachments, including the illusion of self to attain spiritual liberation. But be honest, how many Thai Buddhists follow this teaching?

Dhammakaya, meanwhile, teaches that the amount of merit points you get in life depends on the amount of money you donate to Dhammakaya. Nirvana is also regarded as a heavenly place. The level of luxury and comfort you will get depends on your donations. In short, you get what you pay for.

Purists may not like it, but it is not much different than folk-Thai Buddhism, is it? With modern marketing and an incentive system, however, Dhammakaya is much more effective in raising funds, which makes its the richest temple in the country.

The more followers you recruit and the more donations you raise, the better your chances of sitting in rows closer to the abbot at its grandiose ceremonies. According to Dhammakaya cosmology told by insiders and defectors, its abbot, Phra Dhammachayo, is not just a monk; he is a saint and a saviour who will rescue the world when Doomsday comes.

While traditional temples are often dirty and noisy, Dhammakaya focuses on orderliness, cleanliness, and grandeur. This strikes a chord with the middle class and the new rich who believe in supernatural powers but want a temple with a modern look and style to suit their worldly status. The fund-raising groups also give followers a sense of community in a big city, not to mention the business connections that come with it. In short, Dhammakaya answers the needs which the irrelevant clergy fails to do.

The temple's close connections with the elders explain why the Sangha Council did not follow through with the late supreme patriarch's ruling against Phra Dhammachayo, on claims of divisive teaching and theft, which could have led to his defrockment.

Its close connections with political and business elites also explain why so many lawsuits against Dhammachaya on public fraud never stick. It is no secret that the key candidate, Somdet Phra Maha Ratchamangalacharn, the abbot of Wat Paknam, is close to Dhammakaya. But so are several other members of the Sangha Council.

The wealthy Dhammakaya has no problem pampering the elders who also view Dhammakaya's expansion overseas as a global expansion of Thai Theravada Buddhism without the Sangha having to lift a finger. Dhammakaya scholarships to monks over the years have also expanded the movement's support base nationwide.

If the next supreme patriarch is a Dhammakaya supporter, it is feared the controversial sect will take over the whole Sangha. Distorted Buddhist teaching will be institutionalised and the allocation of the much sought-after clerical ranks will be also decided by Dhammakaya, giving it total control over the clergy.

When the country is under an anti-Thaksin government, it is unlikely that a monk perceived to be pro-Thaksin will be allowed to head the clergy. But will it make a difference if a more politically neutral elder is appointed as the supreme patriarch?

Not much. The late supreme patriarch was an exceptional monk true to teachings. Despite his rank and personal clout, the elders still refused to follow his humble path, and ignored his good advice.

Indeed, there is no need to fear Dhammakaya if the clerical structure is decentralised; if the system to award monks with feudal ranks and power is no more; and if temple finances are transparent. Better still, temples should no longer receive state subsidies, which would force them to shape up to win back public trust.

If we want clerical reform, we need to tackle this centralised, autocratic structure. If not, the conflicts over the supreme patriarch's nomination are mere power games between political rival camps.