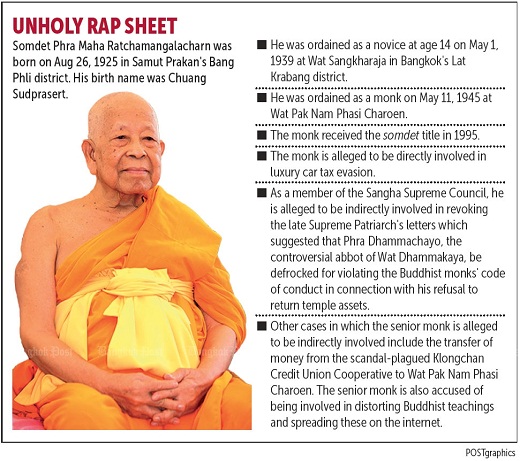 Justice Minister Paiboon Koomchaya said on Monday the case had begun in 2013 during the tenure of the past government, about three years ago. It was taking too long.

The case involves Somdet Phra Maha Ratchamangalacharn, who has been nominated by the Sangha Supreme Council as the new supreme patriarch. The 90-year-old abbot of Wat Pak Nam Phasi Charoen is also known as Somdet Chuang.

Gen Paiboon convened a meeting with officials of the Department of Special Investigation (DSI) to inquire about the progress in the tax evasion case.

The owner of the car would be treated straightforwardly, whether he was proved to be in the right or wrong, Gen Paiboon said.

The DSI had checked the vehicles of the first group but the Mercedes Benz of Somdet Phra Maha Ratchamangalacharn fell into the other group that was still being examined, Pol Maj Woranan said.

As there were demands for the quick result, the DSI had sought information on the abbot's vehicle from the Customs Department, he said. Investigators would find out if the vehicle had been imported as parts or as a completely built unit, he said.

Activist and former national reform councillor Paiboon Nititawan said on Monday he had asked the DSI to speed up its probe into the tax evasion case.

The DSI should conclude if the car was illegally acquired, how the senior monk was involved and if there was any legal violation, he said.

"If the DSI finds nothing wrong, doubts will be relieved. But if there is a legal violation, I believe Somdet Chuang will have a decision to make for the benefit of Buddhism," Mr Paiboon said.

He also planned to ask the Ombudsman to interpret the Sangha Act, to determine if the nomination of the supreme patriarch was actually the authority of the prime minister. If it was, the recent nomination of Somdet Phra Maha Ratchamangalacharn by the Sangha Supreme Council should be shelved, he said.

Activist Buddha Isara, abbot of Wat Or Noi, said on Monday that the Mercedes Benz was a vintage car declared as being reassembled from imported used parts. He said that the car

had actually been imported as a complete unit, because its parts could have been damaged if they had been detached.

If Somdet Chuang did not hand over a smuggled car to the state, he would be considered in violation of a monk rule, Buddha Isara said.

He said the DSI should also look into the other vintage cars kept at Wat Pak Nam Phasi Charoen.