Bangkok, Thailand -- The popular Buakwan temple in Nonthaburi today put up a sign announcing the halting of the performance of Buddhism  ritual for the "child angels" after many people flocking the temple with their superstitious dolls for the rituals. 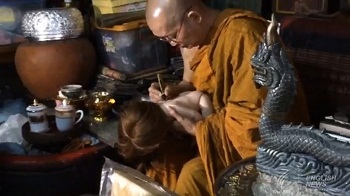 The halting was ordered by the temple abbot as the superstitious dolls are becoming a fever for many people of all profession with the hope that the dolls will bring them luck, happiness and fortunes.

The abbot of the temple asked Phra Ajarn Winai Thitipanyo to stop performing the ritual called “Plook Sek” after the National Office of Buddhism was concern about the fast spreading fever, and security officials were worried that drug traffickers might exploit the trendy dolls.

The Royal Thai Police commissioner also ordered the crackdown of all illegal dolls smuggled into the country as an effort to stamp out drug trafficking attempt.

The sudden announcement this morning disappointed many people who came to the temple with their lifeless kids to receive blessing and the Plook Sek rituals.

One woman who just bought the female doll for 1,500 baht was so disappointed saying she intended to come today with her “daughter” to get blessing.

Phra Ajarn Winai said he would stop all rituals but would continue to preach and receive alms from Buddhists.

Earlier Phra Ajarn Winai Thitipanyo said the practice of performing a ‘Plook Sek’ ritual on an inanimate object such as dolls is not a contravention of Buddhism principles but people must recognize and be able to differentiate the difference of legitimate religious practice and ungrounded superstitious belief.

His Plook Sek ritual performance first featured the painting of Buddhist characters on the doll so that a child’s spirit is invited to posses the ‘Luk Thep’ doll.

Then it is accompanied by a ritual to call on all the 4 natural elements to enter the body of the dolls in the belief that by doing so the owners of the dolls will receive good fortune.

The whole ritual takes around 10 – 15 for one doll and at present many people are flocking to the temple to have similar rituals performed on their owned dolls, he explained.