BANGKOK, Thailand -- Thai soldiers Monday tussled with monks seeking to support their candidate to lead the Buddhist hierarchy in Thailand, taking a politically-tinged religious power struggle to the streets. 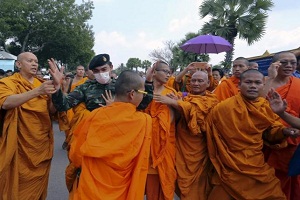 The several dozen troops tried unsuccessfully to block a few hundred monks from a gathering outside Bangkok where the monks were rallying to demand that the government immediately appoint 90-year-old Somdet Phra Maha Ratchamangalacharn to the top ecclesiastical position.

Footage on several television stations showed one monk briefly holding a soldier in a chokehold, though most of the fighting involved mild pushing and shoving. To be seen as attacking a monk would be considered inexcusable in predominantly Buddhist Thailand, and the soldiers sheepishly put up little resistance to the monks' maneuvers.

Critics accuse the senior monk of being linked to corruption, but the controversy is also tied to politics. Phra Ratchamangalacharn has ties with the Dhammakaya sect, which is associated with former Prime Minister Thaksin Shinawatra, who was toppled by a military coup in 2006. Critics of the senior monk overlap to a large extent with Thaksin's critics.

The Dhammakaya sect has a reputation for encouraging materialism and showiness, and is unpopular with many mainstream Buddhists. But Thai Buddhism generally has been tainted in recent years by scandals involving sexual and financial peccadilloes.

Phra Ratchamangalacharn was nominated by tradition through a vote of the senior monks' body, the Supreme Sangha Council, though his opponents have questioned the process. The Cabinet must submit the name to King Bhumibol Adulyadej for endorsement. But Prime Minister Prayuth Chan-ocha has said he will not do so until the controversy is resolved.

Several groups claimed to take part in Monday's protest, although the Dhammakaya sect appeared to be the major mover. In addition to having Phra Ratchamangalacharn appointed, they were demanding that the government not interfere with the Sangha's activities, and that the constitution declare Buddhism the national religion.

Despite being overwhelming Buddhist, Thailand has not had a state religion. But there have been calls to make Buddhism the national religion in the constitution being drafted to replace the one scrapped after the last military coup in 2014. The proposal has gotten some minor impetus from Buddhist fundamentalists disturbed by a Muslim separatist insurgency in the country's three southernmost provinces, the only ones which are mostly Muslim.

Phra Ratchamangalacharn's supporters have explicitly linked politics to the effort to stop his appointment. A Dhammakaya activist's email announcing the protest referred to "Government-supported" monk Buddha Isara and prominent junta supporter Paiboon Nititawan as harassing the Sangha. Both men are high profile opponents of Thaksin.

A leaflet signed by the "Sangha and Buddhist Alliance of Thailand" asserted numerous attempts had been made "to depose the monastic community with political influences. There have been strong indecent insults and false accusations on the Supreme Sangha Council unlike anything in the history of Thailand."

It warned that such efforts would eventually destroy the relationship of the Buddhist community and the Thai state.