Bangkok, Thailand -- A case of arson at a bhikkhuni centre in Rayong is shocking. Although it is yet to be determined what caused it -- land conflicts, gender discrimination, or both -- it is clear that it is not easy being a female monk. And the next charter -- if it passes the referendum -- will not make it any easier. 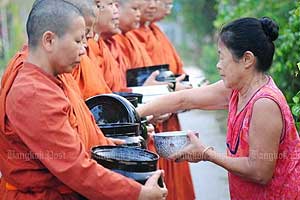 << The greatest hurdles for female monks come from inside the clergy, but Buddhists almost universally welcome the Bhikkuni. (File photo by Suchada Hongsa)

The incident took place at the International Women's Meditation Centre in Rayong early this month. Run by two female monks, Bhikkhuni Lee, an American, and Bhikkhuni Rattanavali, a Thai national, the centre has ordained 35 bhikkhuni and samaneri (female novices) as of 2013, according to its website.

Bhikkhuni Lee blames the attack on sexism in Thai society. Bhikkhuni Rattanavali said land problems might also play a part, which raises questions about the centre's relationship with locals.

Yet, the problem underscores a huge burden faced by women monastics. Apart from having to support themselves, female monks have to work hard to gain the acceptance of locals, all while their male counterparts receive unquestionable support as the legitimate "fields of merits".

This burden is especially heavy if female monks are strangers to the neighbourhoods, which is probably the case of the Rayong centre. Bhikkhuni centres that were once nunneries are spared part of this burden by long-established ties with locals and local monks.

Interestingly, the arson incident at Rayong has received attention from rights groups, but there is still silence from other local bhikkhuni communities.

Despite the growing number of female ordinations in the country, each centre operates independently, each engrossed in its own activities, careful of minding their own business.

This is both a strength and weakness. Independence allows more room for creativity. But without mutual support and oversight, straying from monastic rules is easy. Help is not readily available either when you are in trouble. And without a strong network, there is little chance of female monks combining forces to change unfair laws and cultural practices.

Their cause is not furthered by the Constitution Drafting Committee's draft charter. Apart from strengthening the patriarchal clergy which is suppressing female ordination, the draft charter will also remove old constitutional mechanisms which protect religious freedoms.

According to scholar Kanjana Suthikul, previous charters made it clear that the state is prohibited from infringing on religious practices of any individual or groups just because they are different from mainstream beliefs and practices.

Legally, therefore, Thai women have a constitutional right to become female monks and the clergy's prohibition against female ordination or any action to make it difficult is unconstitutional.

To avoid legal hurdles with the Sangha Council, female monks have declared that since they are ordained by the clergy in Sri Lanka, they are not under Thai Theravada jurisdiction. This means elders do not have power over them.

Yet, the clergy insists on prohibiting any female ordination on Thai soil. They have also asked the Foreign Ministry not to give visas to monks from Sri Lanka and other countries who will come to Thailand to ordain women.

All this is happening even as female monks are supposed to receive constitutional protection from state intervention. Imagine what will happen when the draft removes these protections altogether.

Sangha reform requires monks and temples to stop being dependent on state patronage and financial support so that they can start improving themselves to regain public respect. But the new charter further strengthens state patronage.

In a departure from previous charters, the current draft has made it clear that the state will provide special support to the Thai Theravada clergy. That's not all. The draft practically kills the principle of religious freedom by promising to punish "all forms of violations against Buddhism".

The big question is who holds the power to decide and interpret what "true" Buddhism is.

This dangerous move to monopolise the interpretation of the teachings actually stems from the charter drafters' fear of the capitalist Dhammakaya Temple given its dominance in the Sangha Council. The clause aims to give a constitutional tool to the powers-that-be to punish Dhammakaya, which teaches that one can buy your way to heaven by donating to the temple. The more donations, the more luxurious your real estate in heaven.

The drafters -- and the military regime -- want to stop Dhammakaya from taking over the Sangha Council. What if they cannot? Do we face the prospect of Dhammakaya having the last say in what "true" Buddhism is? Even if it can, should we allow anyone to monopolise the teachings?

Why should we think our Thai Theravada Buddhism is purer than Buddhism as practiced in other countries? Isn't this part of nationalism, of egotism, which is exactly what the Buddha teaches us to transcend?

Bhikkhuni face a special threat under the new charter.

At present, the clergy insists the Theravada bhikkhuni lineage is extinct, thus cannot be revived. They fiercely insist their opposition does not stem from gender discrimination, but from their strict observance of original rules related to female ordination which require double ordinations from the male and female clergy. With the Theravada bhikkhuni lineage already extinct, they argue, new female ordinations are simply impossible.

Many Buddhist experts disagree. In ancient times, female monks were involved with only initial preparations for the ordination to be performed by monks. So even when there are no female monks present, male monks can still ordain women. The elders say no. Worse, they threaten to punish any monks for ordaining women and also for showing their support for bhikkhuni.

The clergy see it as a technical problem. Others see it as sheer misogyny.

With the draft charter allowing the clergy not only to monopolise the teachings but also to punish any individuals and groups that undermine Buddhism -- read the clergy -- it is possible that female monks will be targeted in future crackdowns.

If the current draft charter cannot protect female monks, then the people can. Disillusioned with monks' widespread misconduct, people are increasingly seeking spiritual teachers outside the male-dominated clergy. It is now no longer necessary for spiritual teachers to be monastics.

As long as the bhikkhuni are maintaining their spiritual paths and cordial relations with local communities, there is no stopping female ordination.