BANGKOK, Thailand -- Tensions between Thai police and a powerful Buddhist sect have spiked this week after an arrest warrant was issued for an abbot at the centre of an alleged multi-million dollar scandal. 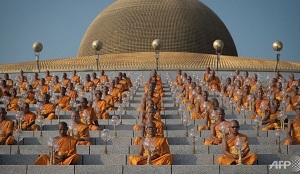 << Critics say the Dhammakaya temple is closely linked to Thaksin Shinawatra, the billionaire former premier at the heart of the country's political rupture. They accuse it of trying to dominate the Thai faith with prosperity theology style teachings that promote donations in return for good karma.

The controversy over the wealthy Dhammakaya temple, which is renowned for its influential allies and colourful displays of mass devotion, has revived fears over the state of Buddhism in a nation where 95 per cent of the population adhere to the faith.

The kingdom's Buddhist clergy has been mired in controversies ranging from allegations of undeclared gifts of luxury cars to sex and drugs scandals.

[GAD}Critics say the Dhammakaya temple is closely linked to Thaksin Shinawatra, the billionaire former premier at the heart of the country's political rupture.

They accuse it of trying to dominate the Thai faith with prosperity theology style teachings that promote donations in return for good karma.

A court late Tuesday (May 17) issued an arrest warrant for Phra Dhammachayo, who has failed to report to police over accusations he received illegal donations worth 1.2 billion baht (US$33 million) that had been embezzled from a cooperative bank.

The temple, which boasts a sprawling and futuristic headquarters in northern Bangkok, refutes the allegations and insists the 72-year-old abbot is too sick to report to authorities.

But that has not dimmed fears of a showdown between police and the temple, which says it has millions of supporters, some of whom clashed with soldiers in February.

"We regret that the authority has issued the arrest warrant... but Dhammakaya disciples do not want to use mob rule over rule of law," Ong-art Dhamnitha, a representative of the sect's followers, told reporters Wednesday.

Last April the Dhammakaya temple returned some US$20 million given by a company executive later accused of embezzling the cash.

It says the money was received in good faith and without knowledge of the executive's crime. The temple defends itself against its theological critics saying it provides a modern and accessible form of Buddhism.

Investigators say the abbot has to surrender by May 26 to hear charges of money laundering and handling stolen money, which carry up to 20 years in jail.

The chief of Thailand's Department of Special Investigations said he was keen to avoid a confrontation.

"There is no need to bring forces to the temple as it might spark a conflict. If he (the abbot) still does not come, we will meet to find further measures," Paisit Wongmeuang said on Tuesday.