KANCHANABURI, Thailand -- A Buddhist temple denied that its abbot was involved in illegal trafficking of tigers at a news conference Thursday that was its first detailed response since Thailand's wildlife authority removed scores of big cats from the popular tourist attraction and found dead cubs in jars and freezers. 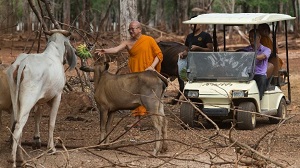 "What happened here seems to suggest that many crimes were committed," said Siri Wangboongerd, a spokesman of the temple in Kanchanaburi, about 200 kilometers (120 miles) west of Bangkok. "But what happened here wasn't done by the abbot because he does not manage this place," he told journalists on the temple premises.

As he spoke, the abbot, Phra Wisutthi Sarathera, appeared briefly, riding in a golf cart which circled the news conference. But he did not address the journalists. Police were present at the conference as observers. The abbot has not been charged with any crime.

Siri said the temple's tourist trade is managed by other people and not by the abbot.

"There are news reports that this temple is part of the tiger trade route to the black market. How could we trade tigers? Who would do such a thing? This is a temple. This accusation is made without evidence," he said, in the first comprehensive statement from the temple since the scandal broke.

he temple, which had been heavily promoted to tourists, charged admission for visitors to take photos with the tigers and walk them on leashes. Last week, Thailand's wildlife authority shut down the temple's animal activities after the discovery of dozens of cubs in freezers and jars on the premises. It also removed more than 137 tigers from the temple grounds to rescue shelters. On Tuesday, police discovered a slaughterhouse and tiger holding facility that they believe was linked to the temple and used in a suspected animal trafficking network.

Animal rights activists have long accused the temple of mistreating its tigers. The government suspects the monks at the temple have been involved in illegal breeding and trafficking of the animals. The temple resisted previous efforts to take away the tigers, but relented last week after police obtained a court order.

A day after seizing the tigers, police stopped a monk and two other men in a truck leaving the temple with two tiger skins and a suitcase with tiger teeth.
TOP