PATHUM THANI, Thailand -- It is a temple for a changing Thailand: clean, unadorned, high-tech and unashamed of praying for wealth. 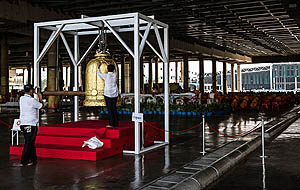 <<  Gold leaf being placed on a bell in the Grand Meditation Stadium in Wat Dhammakaya. The temple has been controversial because of its ostentatious wealth, its challenge to mainstream Buddhism, and its message that it is fine for followers to be rich. Credit Lauren DeCicca for The New York Times

“Sit here and get rich,” read small medallions embedded in the floor under each white plastic chair in a vast, open-sided meditation center. In his sermons, the temple’s charismatic 72-year-old leader, Phra Dhammachayo, often exhorts his adherents, “Be rich, be rich, be rich!”

With its endorsement of worldly comforts and its no-nonsense approach to ritual, the temple, known as Wat Dhammakaya and the largest in Thailand, has attracted the allegiance of growing numbers of followers in a movement whose popularity has unsettled the government and the Buddhist hierarchy.

The authorities have long tried to clip its wings, and for the past month the police have been threatening to arrest Phra Dhammachayo despite a warning by the temple that it would mobilize a human shield of chanting monks to protect him.

The charge against him is embezzlement, the latest of many accusations that stretch decades, while the top body of Buddhism has accused him of heresy. Last week, it stripped him of his title, though that does not seem to have threatened his status on the grounds of Wat Dhammakaya.

The temple is the spiritual embodiment of the social and economic dislocations that have shaken Thailand. The economic boom of the 1980s created a well-to-do middle class for whom moneymaking rivaled Buddhist tradition as a core value. They needed something that brought the two together.

Cash machines are placed conveniently near a meditation hall with screens that declare, “Shortcut to making merit,” the important virtue of doing good deeds. As a merit-making bonus, credit card points earned by the transaction can go directly to the temple.

“Buddha never taught us to live in hardship,” said the temple spokesman, Phra Pasura Dantamano. He added: “Buddha teaches moderation, but there are different levels of society. If I were a businessman or a farmer I would define moderation in a different way.”

This perspective is a departure from traditional Thai Buddhism, in which there is less acceptance of wealth, said Suwanna Satha-Anand, a professor of philosophy at Chulalongkorn University.

“They crafted a possibility of a new form of Buddhism which is friendly to capitalism or wealth,” she said. “This is the voice of the urban middle or upper class who are looking for a more modern image of what a Buddhist can be.”

Well-designed websites promise a form of meditation that is “simple, easy and effective.” The temple itself manifests cleanliness and efficiency alongside tech-savvy sophistication. Its huge boxy buildings are aggressively plain, finished with unpainted gray concrete. It has no spire, few bells and little incense.
Photo
Phra Dhammachayo, the temple’s leader, last year. For the past month the police have threatened to arrest him on a charge of embezzlement, while the top body of Buddhism has accused him of heresy. Credit Damir Sagolj/Reuters

But it does not lack grandeur. Its centerpiece is a huge, flat dome more than 2,000 feet in diameter that even the temple concedes looks like a flying saucer. It radiates wealth. The dome’s surface consists of 300,000 small Buddha statues made of silicon gold, each as tall as an open hand and engraved with the name of a donor — suggested donation 10,000 baht, or about $300.

On special occasions, the vast plaza around the dome is the scene of spectacular gatherings — tens of thousands of monks in orange and worshipers in white — that rival an Olympics opening ceremony. The monks circle the dome as if the little statues had come to life, and they sit in perfect, ordered rows that seem to stretch to the horizon. At night, they march with glowing lights, and thousands of lighter-than-air lanterns float into the sky.

In keeping with the stark design of the temple, even these extravagant displays are marked by almost militaristic order and precision.

The same rapid rise to prosperity that inspired the popularity of Wat Dhammakaya also underlies the political divisions and outbreaks of violence that have shaken Thailand in recent years.

Those divisions are being held in check by a military junta that seized power in 2014. “When you have hundreds of thousands of devotees, some people with power would be scared of that,” Phra Pasura said.

He compared the Dhammakaya movement to the populist rise of Thaksin Shinawatra, a prime minister who was ousted in another coup, in 2006, and now lives in exile.

“People are afraid that if we get too large we could be a threat,” Phra Pasura said. He would not estimate the number of followers, but said they were in the hundreds of thousands.

At the moment, the government is pursuing several cases against Phra Dhammachayo, the foremost of which is a charge that he embezzled $40 million from a credit union. He has said he was unaware of the source of the funds, and his followers have paid off the debt.

But the government is still trying to bring him to court. For weeks, the police have been threatening to seize him, at one point saying they were ready to deploy 2,000 officers to confront what was likely to be a phalanx of monks.

It is a common pattern in Thailand of threat and retreat, whether for the surrender of “red shirt” demonstrators in 2010 or for monks at another temple earlier this year to give up their tame tigers at a moneymaking petting zoo.

Phra Dhammachayo has refused to turn himself in, asserting that he suffers from diabetes and Turner syndrome, a chromosomal disorder. He has not been seen in public for six months, and there is no confirmation that he is still inside the temple.

Wherever he is, Phra Dhammachayo remains a magnetic figure who draws intense devotion from his followers.

“I am what I am because of him,” said Watjana Suriyatham, 51, an assistant professor of English at Thammasat University.

Mirella Kampus, 34, a Swiss member of the staff, said she had been at the temple for six years and had found her calling there. “If I had not known him, my life would be difficult,” she said. “I would not have found a reason for my life.”

The son of an engineer, Phra Dhammachayo studied economics at Kasetsart University, but he had already dedicated himself to Buddhism. Soon after graduation, he founded the little meditation center that grew to become the largest temple in Thailand, with a territory that it says comprises 1,000 acres.

He also seems to be a man of unusual visions.

In 2012, in an account disseminated by the temple’s websites, he told his followers that Steve Jobs, the co-founder of Apple, had been reincarnated and was living in a six-story heavenly palace made of silver and crystal glass and served by a staff of 20 not far from Apple’s Cupertino, Calif., headquarters.

The vast temple grounds today seem hushed and still. Meditation halls are filled with the chanting of hundreds of monks and worshipers, sometimes with the aid of a karaoke-style scroll on a large screen.

For the temple, cleanliness and order are an important element of good karma. Devotees are expected not only to dress in white, but also to remove their sandals and place them in regimented rows when entering meditation rooms.

Not everyone is chanting. With its vast underground parking garage, clean toilets, free food and sheltered plazas, the temple is a refuge from the noisy outside world. Families often come to meditate together, to picnic and even to stay the night in tents that are provided for them.

“My country is very clean,” she said. “When I came to Thailand, oh my god! But the temple is very clean.” She added, “If you keep orderliness outside, you are orderly inside and it is easier to meditate.”
TOP