Bangkok, Thailand -- The billboard rises, like a Buddhist temple, up ahead on the right-hand side of the airport highway. 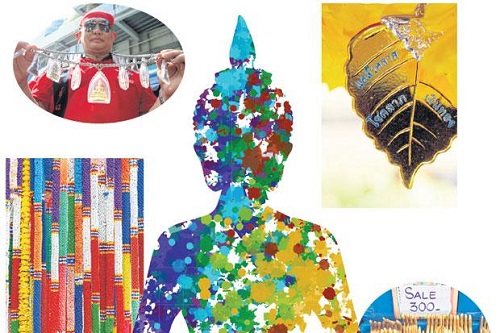 "That billboard is on the wrong side of the highway," I announce to my Thai colleagues. "Surely if they want to warn foreigners about Thai culture, the billboard should be inbound, not outbound."

I like it when I make astute observations like this; it means yet again I have warded off Mr Alzheimer, who has been hanging around outside the corridors of my mind in recent years.

The billboard belongs to a foundation dedicated to the preservation of Buddhism. From experience I have found such religious foundations to be very well meaning on the outset.

Unfortunately, over time they inevitably descend into gatherings of ethereal folk who, if not dressed in white, dress as 1950s schoolmasters and dedicate their lives to telling me how I should be leading my own, as if somehow over the decades I haven't worked that out for myself.

The Buddhist Preservation Foundation suddenly turns into the Association of Thought Police (ATP) or, worse, the Witch Hunt And Moral High Road Collective -- WHAM-HRC for short.

Don't get me wrong. I agree that we should be respectful towards other people's religions. Stick-thin models draping themselves over Buddha statues in the name of selling perfume or brand-name clothes are offensive. It's almost as offensive as Thai schoolkids dressing up in Gestapo uniforms and funny little moustaches while goose-stepping in school parades -- not that I can spot a single billboard warning us against that.

And yet this billboard is not asking us to be respectful towards religion. It is in fact pushing a private point of view and cleverly using foreign ignorance of Thai social mores to pass it off as law.
Take that picture of the dirty red cross slapped over the Buddha statue head, for example. I have no idea how it relates to being disrespectful to the Lord Buddha. What is disrespectful about the Buddha's head that warrants a red cross across it? The billboard is reducing the Lord Buddha to the level of a cigarette, or purchasing a beer between the hours of 2pm and 5pm.

"No, Khun Andrew, you don't understand," says one of my colleagues, in the cab with me, for the 3,675th time this year. "It's about foreigners who get tattoos in the wrong places. Like legs or feet."

"I saw one on a foreigner's lower back once -- part of it went down to his backside," added my assistant, Waen.

"I won't even ask how you managed to see that," I said, and Waen blushed as I continued by quoting one of my favourite sayings: "Idiot is as idiot does. Anyone with half a brain should know not to slap a tattoo of a deity on one's backside or lower leg. And besides, they are temporary visitors -- they will return to their home country soon enough and we won't see their offensive tattoo. Can't we just accept some people are stupid and to hell with them?"
Clearly not, if the billboards on both sides of the airport expressway are anything to go by.

The next day the three of us were heading back home from the airport when we spotted a similar billboard on the other side. Ha! Out, damned Alzheimer spot!

If the outbound one was ambiguous, though, the inbound one reminded me of goose-stepping Thai schoolkids in Gestapo uniforms.

"STOP DISRESPECTING BUDDHA," it screamed. "DO NOT TATTOO, BUY, SELL AS FURNITURE OR MERCHANDISE."
Nothing like being screamed at in bad English grammar in the first five kilometres of your holiday to the Land of Smiles.

Let's start with furniture. When was the last time you sat in a Buddha bean bag? I've been to homes of the rich and famous. I've seen it all, from the fabulously stylish to million-dollar gold ducks on the bathroom wall. But I've never ever lounged upon a Buddhist sofa or put my feet upon a Buddhist pouf.

What is more intriguing is that the billboard warns us not to buy and sell, as if that is an illegal act.

Aren't there laws against false advertising? I can't imagine Sunsilk getting away with a billboard claiming its soap can cure cancer. Why allow a Buddhist foundation to perpetrate misleading information about Thai law?

There is a multi-billion-dollar industry here centred around the buying and selling of Buddhist amulets. At any given time half the nation is engaging in collecting and exchanging them. When I visit a temple, I buy an amulet as small gifts for my Buddhist friends. It's a great thing to have and a wonderful souvenir of Thailand.

Technically you cannot "buy" the Lord Buddha. How can one purchase a sage? To get around this, Thais have erased the words "buy" and "sell" from the act of exchanging Buddha images for money. Instead, you "rent" one.

That Buddhist foundation with the penchant for freeway billboards should be instructing tourists not to RENT Buddhist images -- but why do that when it isn't illegal?

The truth is, the foundation is simply presenting a very personal and conservative opinion. I respect anybody who believes that Buddhist amulets should not be bought or sold, just as I respect anybody who believes that seven is a lucky number and 13 is not. Just don't force your personal belief onto me, or worse, disguise it as national law on a billboard.

About the only tenuous legal link is that Thailand has strict unenforced laws governing the taking of Buddha images out of the country. Yes, that's right, we have "strict unenforced laws" here.
I once bought a beautiful Buddha statue for friends who were getting married in Sydney. I checked out the Thai law and discovered I needed to take pictures of the statue, front and back and side, then have them endorsed by a shady government department over on Samsen Road.

A hassle, but I did it. Armed with the statue and my papers, I checked my bags in at Suvarnabhumi airport and awaited the bells and sirens signalling my contraband.

It never happened. The next time I gave a Buddhist image as a gift, I simply put it in bubble wrap and placed it, mindfully, inside my travel case. Again, no bells and sirens, and no requirement for a shady trip to Samsen.

Thailand has a relatively relaxed attitude towards religion. I am not including the three southernmost provinces in that broad generalisation. But it's true; we don't have mass hangings because people don't follow a particular deity. We don't build divisive walls.
We don't announce travel bans on countries professing religions that aren't ours.

We are more civilised than that. Instead, we do some pretty crazy things in the name of religion.

We pray to Buddha for lucky lottery numbers, showing our spiritual loyalty for the express purpose of winning 6 million baht. We hang Buddhist amulets around our necks to protect us from retribution for the bad things we do.

We hand over pay cheques to charismatic monks who aren't supposed to touch money and then ride in Lear jets. We buy Buddhist statues because the temple guarantees us a place in Buddhist heaven, not that such a heaven exists in the religion's purest form.

So leave the tourists alone. Tear down those billboards, translate them into Thai, and slap 'em up around the country. Better still ... just tear 'em down.
TOP