Clergy's monopoly over Buddhist teachings is over

Bangkok, Thailand -- People who believed that the majority of monks do not follow the Buddha's path have increasingly turned to meditation retreats led by non-monk teachers outside temples. A religious group called Techo Vipassana is one of them. 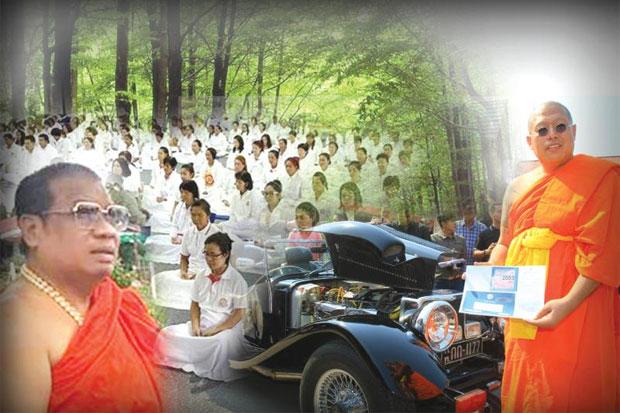 The controversy surrounding a new religious group called Techo Vipassana led by a self-proclaimed enlightened woman should remind the clergy that, short of Sangha reform, it is fighting a losing battle in the modern faith market.

Like it or not, the time of monks monopolising Buddhist teachings and practices is now over.
Thanks to information technology, ordinary people can now have direct access to the Buddha's teachings without having to go through the "professionals" in temples as in the old days. The result is the rise of lay meditation masters -- both men and women, both genuine and fake.

Meditation retreats led by non-monk teachers outside temples are also an increasingly popular answer the middle class' spiritual quests that cannot be met by the traditional clergy.

Acharavadee Wongsakon, leader of the Techo Vipassana Meditation Centre, is just one of them.

Ms Acharavadee became the centre of a controversy when her photos as a female religious guru surrounded by doting disciples went viral on social media. The photos show monks paying respects to her, implying her superior spiritual status while her seating in the religious ceremony gave her near-royal status.

Who is she? That question has spread like wildfire.

What is this strange-sounding Techo Vipassana meditation? The term is unheard of in Buddhism. And while there are many self-proclaimed enlightened meditation masters in the faith market, why is Ms Acharavadee so deeply hated by the clergy?

With an educational background in marketing and film-making, Ms Acharavadee worked in the advertising industry before making her name in high society as a jewellery designer and owner of a high-profile diamond store. She left high society about a decade ago to set up a Dhamma school for youngsters before setting up an organisation called "Knowing Buddha" to rally for legal punishment against abuses of Buddha images.

Then her books hit the book stands, establishing her new role as a meditation guru. In "Kharawat Banlu Tham", meaning enlightenment of lay Buddhists, she said the Buddha told her to write about her meditation experiences and ability to see past lives. In Techo Vipassana, she relates how the spirit of the late Somdet Phutthachan To Phrom Rangsi, a saint to Thai Buddhists, came to teach her a long-lost short cut to nirvana called Techo Vipassana.

According to her website, Techo means the fire element. By sharpening mental concentration, the fire element in one's body will be ignited to burn up all mental impurities, resulting in lightning-speed enlightenment.

She claimed that was how she became spiritually liberated in a short period, and so did many others who followed her shortcut to enlightenment.

Hers is a classic story line of the creation of new religious groups. You establish yourself as the chosen one with magical powers and direct access to the locals' saints or gods, the saviour who can provide a shortcut to salvation.

When traditional Buddhism tells you to be patient as it can take countless lifetimes to thoroughly purify your minds to end the cycle of births and deaths, it is not surprising that many in our fast-food culture are attracted to Ms Acharavadee's promise of nirvana in this lifetime.

As curious as Ms Acharavadee's claims are, they are not the reason she got into trouble with the clergy.

In mid-January, she launched her "Stop Alajji" (stop wayward monks) campaign to "protect Buddhism" and asserted that the majority of monks cheat people into making merit for their own gain.

The monks were immediately up in arms.

Representing the voices of mainstream clergy, the website www.alittlebuddha.com fired the opening salvo. Ms Acharavadee is accused of insulting monks, being anti-clergy and breaking Buddhist teachings by falsely claiming and advertising her own enlightenment. Her fund-raising activities have also been questioned and calls were made for state intervention and punishment.

The Techo group acted fast. Last week, it held a press conference to apologise to "good monks" for going overboard by stating that most Thai monks are wayward as a way to emphasise the urgency of the problem.

She blamed the controversy on defectors who maliciously used her photos on social media out of context to discredit her; and allegations of acting like a royal are particularly sensitive given the harsh lese majeste law.

She called the allegation that she is demanding big donations from followers in return of a speedy enlightenment "the most vicious lie" of the defectors, and countered with a promise to sue them.

History dating back to Buddha's time is also full of lay Buddhists attaining different levels of spiritual purification through practising the precepts and meditation without having to be ordained, she argued.

Amid prevalent misunderstanding that spiritual liberation is only for monastics, she said she shared her spiritual experience not to boast about it, but to encourage people to practice insightful meditation and live correctly so they can be spiritually purified step by step.

She denied the allegation that her group is a cult, insisting that her teachings come from Buddhism and she has a strong track record through her Knowing Buddha organisation as a protector of Buddhism.

Talking about the monks' fury, I suspect that it also has much to do with the Techo leader being a woman.

Traditionally, a woman's role in our patriarchal clergy is to be subservient and supportive to monks. If women want a monastic life, they must accept a deferential status as nuns. If they attempt to achieve equality as female monks, they must be punished and, better still, eliminated.

Ms Acharavadee is certainly not the first female meditation teacher. The late Siri Krinchai revolutionised traditional meditation by making it systematic to accommodate mass retreat. Despite high public respect, she remained humble throughout her life.

But Ms Acharavadee is different. She claims sainthood for herself and openly belittles monkshood by telling people they don't need to go to temples because most monks are unworthy of respect.

The monks' rage has prompted the National Office of Buddhism to investigate whether the Techo Vipassana group "violates Buddhism and creates division in society".

Yes, the same National Office of Buddhism that was recently embroiled in a corruption scandal involving its top executives colluding with senior monks to swindle state funds for temple restoration.

Do we really think this agency has the integrity to have a final say on what is "true" or "false" Buddhism? Should criticism against monks be prohibited? Should monks use state agencies to eliminate their competitors? Should the state intervene in people's beliefs at all?

Cults or not, we have no right to eliminate belief groups we disagree with unless they break the law.

I call Techo Vipassana a new religious group, not a cult, because it is a neutral term while cult has negative connotations which violate religious freedoms. It can also be easily abused to trigger hate leading to banishment for political purposes.

When mainstream religious organisations can no longer meet the spiritual needs of a modern, fragmented society with diverse needs, the emergence of new belief groups is common, and should be accepted as such. Only when they violate the law shopuld intervention be necessary.

Admit it, Ms Acharavadee is not alone in believing the majority of monks do not follow the Buddha's path. It's why people are turning to groups who can give them the spiritual guidance they want.

For new religious groups, the lessons learned from the Techo controversy are to stay safe by refraining from criticising the clergy, even of it is the truth.

For the clergy, it should learn that the best way to survive in the competitive faith market is to return to the monks' original vocation as expected by the public. If not, being a crybaby by endlessly demanding state help will not stop new religious groups from stepping in to take the cake.
TOP