Worship when you want

Bangkok, Thailand -- One city temple’s flexi-hours have proved a big draw to the time-challenged, and authorities hope to see others follow suit. Bangkok’s Wat Suthat Thepwararam is one of the few city temples that is crowded most evenings, thanks to its flexi-hours that cater to residents who are pressed for time. From 7am to 9pm, it has become an increasingly popular place for those who come to pray, hear sermons and meditate after a stressful day at work. 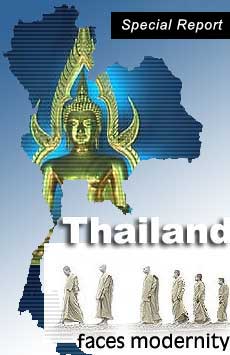 The monastery has opened late into the evening for more than a decade, and has become a model for the Culture Ministry to emulate.

The ministry hopes other temples countrywide will also adopt flexi-hours so that more people, especially teenagers, may be able to embrace Buddhism.

“As for teens, we should not blame them for not going to temples. I believe if more temples adapt to changing times, more teens should come,” he said.

About 60 monks at the temple took part in the late-evening activities when they started in 1994.

Initially, there were few visitors but the temple did not give up.

“Today, we have up to 400 people joining our late-evening programme on a weekday. The number of visitors at weekends is higher.

With its historical importance and magnificent architecture, the temple has been nominated as a Unesco World Heritage Site.

Prior to 1994, the temple was very conservative. Visitors could pay respect to the image but were not allowed to pray with monks, said Phra Ratchavichit.

Situated near the Bangkok Metropolitan Administration headquarters, the temple receives most of its visitors around 6.30pm.

At 7pm, monks start taking turns to lead prayers before conducting a sermon, based on the Tripitaka.

“We focus only on Phra Sutra, one of the Tripitaka’s three parts. We’ve not completed this part yet, even though we’ve been doing it for the past 11 years. The contents are really lengthy,” Phra Ratchavichit said.

After the sermon, visitors meditate for 15 minutes. When it ends, they help shut the windows and doors. Most leave by 9pm.

Suvimol Wongluck, 25, goes to Wat Suthat almost every evening even though her home is not close by.

“Wat Suthat is flexible as most temples shut by late afternoon. It’s convenient for me. Moreover, I like the beautiful architecture of this temple,” she said.

Somkiet Katesrinarong, 36, who works at a bookstore in nearby Pahurat, said Wat Suthat was his only option as he finishes work at 7pm.

“I like prayers. It helps you cope with life better. When you’re in trouble, prayers help you manage problems at hand more efficiently,” he said.

Meanwhile, Noppadon Sinpisuth, a university student, said he visited temples only once or twice a year because he is not totally comfortable in such places.

“Basically, I feel awkward. It would be great if temples were modernised to appeal to a younger crowd. Otherwise, I suppose many of them will still stay away,” he said.

Another vocational school student, Burinthorn Sae Lor, said: “Teenagers prefer ease and convenience. Dharma should be made easier for youths. Buddhist leaders should also carry out a public relations campaign to attract young people. We may also use business-like methods to draw teens.

“In addition, some teens have a somewhat negative perception of monks because of scandalous stories about some monks.”

A recent survey showed 45 per cent of local teens had never prayed at a temple, listened to sermons or meditated there.

To address this trend, the Culture Ministry is planning to introduce a religious zone inside department stores where teens can join in a prayer with monks.

Preecha Kantiya of the Religious Affair Department said the government was also considering trying to attract teens to temples by organising tutorials, music and computer training sessions there.

“First of all, we want to get them inside the temples so that our monks can encourage them to embrace Buddhism. We may also hold a Sunday Buddhist school in every province,” he said.

Dr Amornwit Nakhontap of Chulalongkorn University’s Faculty of Education said: “Teens do need counselling, but Buddhist temples have been unable to adapt to meet their needs. For instance, teens may prefer easier ways to understand Buddha’s teachings for self-realisation and self-control.”

“More importantly, monks also have to be more innovative in dealing with youths. Young monks should add painting or music classes into their sermons. They have to befriend youths before they can teach them,” he added.