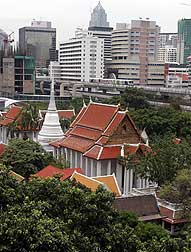 << Wat Pathum Wanaram on Rama I road is a green shelter in the middle of city skyscrapers in Pathumwan district. About 300 people visit the temple every day for dharma practice. — SAROT MEKSOPHAWANNAKUL

She does not go there to shop for brand-name products at luxury department stores that line the street in the bustling shopping district. Nor does she want to dine in lavish restaurants.

Her mission is different - meditation at Wat Pathum Wanaram temple, sandwiched between Siam Paragon shopping complex and Central World Plaza. She likes to pray before going to work at TOT Corp in Chaeng Wattana.

Siriwan, 42, usually leaves home from Wong Wian Yai in Thon Buri at 5am and drives to the temple on Rama I road for dharma practice and alms offering.

Siriwan said there was nothing unusual about meditating in a temple surrounded by shopping malls and skyscrapers.

"People should know this temple has been here for over a century while shopping malls came just a few decades ago. I think both can co-exist. Siam Square will have more than earthly pleasures to offer. People can also find spiritual happiness in the temple after shopping."

The spiritual happiness, unlike the goods on offer in the shops, is free, she said.

The temple is like another world. Pathum Wanaram temple has set aside nine rai of its 15-rai plot of land as a green area for people studying dharma at the Sala Phrarajasaddha Dharma Centre. It is surrounded by several huge plants, about one metre in diameter, some 100 years old.

The "forest" helps filter the air, providing natural protection from the pollution outside.

This temple was built in 1853 during the reign of King Mongkut and served as a royal retreat during the time of King Chulalongkorn.

In the early days, the temple was surrounded by rice fields and swamps filled with lotus plants. The king called the palace Wang Sa Pathum or Palace of the Lotus Pond and named the district Pathumwan. Pathum means lotus in the local dialect.

Phra Pisanpatanatorn or Chao Kun Thavorn Chittathavaro, assistant abbot of the temple and the director of the dharma centre, said forests also play an important part in Buddhist history.

"Lord Buddha was born, became enlightened and passed away in forest environment. I would say the forest is an important part of Buddhist temples for it helps create peace and tranquility," he said.

He has been in charge of the dharma centre since it opened in 1990. He also takes care of the temple plants.

Around 300 people visit the 'forest temple' every day and the number is increasing due to the centre's various activities.

Nuthathai Kriengthanasak, a 29-year-old entrepreneur, said she was surprised to see shopping centres develop around the temple. "This is another world outside Siam Square. It's peaceful and tranquil in here amid all the construction work which goes on around the clock. This is just like a country temple," she said, while attending a three-day meditation course there this week.

"When New Year revellers held a countdown at the nearby Central World Plaza this year, we concentrated and prayed in calmness, undisturbed by the noise. We were here until dawn," said Siriwan.