In Thailand, More Survive AIDS, Only to Face Rejection

LOP BURI, Thailand -- Thailand’s primary AIDS hospice at a Buddhist temple here, once a place of certain death, is now becoming overcrowded by the living — people whose lives have been saved by medication but are rejected by their families or neighbors. 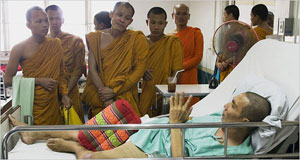 Already an international leader in programs for prevention of H.I.V. infection, Thailand has over the past year become a pioneer in distributing low-cost antiretroviral drugs, which are available to all, for less than a dollar per treatment.

At the same time, though, Thailand has made little headway in easing a harsh stigma that was fed by its successful campaign against the disease. As more people are living longer, more are becoming outcasts in a family-based society where it is difficult to blend into the crowd.

Thailand has been on the front lines of the AIDS epidemic since it began in the 1980’s, when it was hit hard, and then in the 1990’s, when it became a model of prevention with public education campaigns.

Pointing up what experts say could be one of the next challenges as low-cost treatments spread around the world, the AIDS temple and a small satellite village have become, in effect, a new sort of leper colony.

“This is our new problem,” said the temple’s abbot, Alongkot Dikkapanyo, 53, who founded the hospice 14 years ago. “What should we do with a healthy person who is rejected by their family and can’t work? This will be a big burden on society in the future.”

In a special annex, the temple stores thousands of white cotton sacks of cremated remains that were never claimed by relatives. Cremations are fewer now, and these days, hundreds of homeless survivors wander the grounds, sweeping the footpaths, doing their laundry and helping to care for the sick.

Thailand’s successes in both prevention and treatment have brought with them another, perhaps predictable problem: the loss of a sense of urgency that has caused a slackening of prevention campaigns and the beginning of a rise in new infections.

In addition, experts say about 5 percent of drug recipients each year will develop resistance and need to switch to much more expensive “second line” drug treatments, which are covered by patents and will strain the government’s budget.

Since 1984, one million people have been infected in Thailand; 400,000 have died. In an August report, the World Bank estimated that without Thailand’s vigorous prevention program, a total of 7.7 million people would have become infected.

Fewer than 17,000 new infections are expected this year, said Patrick Brenny, the Thailand coordinator for Unaids, the United Nations agency dealing with AIDS. That compares with 143,000 new infections in 1990, according to the World Bank.

The bank estimated that the medications are now reaching 80,000 people, or 90 percent of those who need them, although other estimates say the percentage is somewhat lower. Only about 5,000 people were receiving the treatments two years ago.

The infection rate in Thailand peaked in 1994, the report said, and has been cut to 1.4 percent. But infections have apparently begun to climb as the epidemic has become a lower priority for the government.

“Public education has basically fallen asleep at the wheel,” said Mechai Viravaidya, who heads the private Population and Community Development Association and has been the driving force behind the country’s dramatic success in combating the disease.

“H.I.V. infections are going up, I believe 30 percent more than before,” he said. “Mostly it’s young people who are asking, ‘Is AIDS still around? There was talk about it before but now there’s nothing.’ ”

The World Bank study also noted that risky behavior was increasing. Quoting a recent survey, it said that only one in four male army conscripts reported using a condom with women who were neither prostitutes nor regular sex partners.

As a result, Thailand faces the need for two seemingly contradictory campaigns, one to re-educate the public about the horrors of the disease, the other to reassure it that infected people are not dangerous.

Prevention and treatment are closely linked, the World Bank said. The distribution of low-cost medicine has been made possible by the saving, through prevention, of an estimated $18.6 billion in potential medical costs. “Prevention efforts allowed Thailand to become one of the few developing countries giving life-prolonging antiretroviral therapy to people living with H.I.V.,” the bank’s report said.

Some of the results can be seen here at the Phra Baht Nam Phu Temple, 75 miles north of Bangkok, where families still sometimes drop off a dying relative, then drive away, never to return.

The intensive-care ward is now treating 33 patients, some of them dying, some growing healthier with medication. At the same time, the sprawling temple grounds and its village annex are home to more than 500 people living with AIDS.

Ninety percent of patients who come here survive, the abbot said. But he said 9 of 10 of those are unable to return home, or find a new one where nobody knows them. “In the past they would come here and die and we would cremate them,” he said. The temple has conducted some 10,000 cremations over the years.

“The new ones may really stay a long time, a lifetime,” he said. “If they stay here, they are happier. They are with friends. We understand one another. Nobody discriminates against one another.”

The discrimination is just a short walk away through the temple grounds, among the visitors who come to worship and the vendors who sell them food and souvenirs.

Patients here say the vendors have a rule for them, “You touch it, you buy it,” and sometimes shout, “Stand back! Don’t touch anything!”

When patients wander close to the temple visitors, people back away “like we are some kind of alien,” one said.

An official with Unaids in Geneva, Purnima Mane, said in a telephone interview that discrimination against those who have survived on medication was driving people into lives of isolation in other developing countries as well, though she did not know of other colonies.

“In Africa, for example, with access to treatment more available and people already isolated from their families,” she said, “they would find it difficult to suddenly find a home back with their families just because they look healthy.” In Brazil, which she said was another leader in the distribution of low-cost medication, survivors have formed self-help networks.

The latest concern in Thailand is the need for the more expensive second-line treatments, which could make it difficult to maintain the universal medical coverage now available for patients.

Thailand is currently negotiating with drug companies for cheaper prices, but could decide to declare a medical emergency, break the patents and allow generic versions to be manufactured.

This could save it $3.2 billion in medical costs over the next decade, the World Bank said. But it could cost much more money in trade sanctions by the United States, which vigorously protects patents.

The country, like the temple here, is grappling with a new problem in AIDS treatment. In the long run, it is a much more expensive proposition to live than to die.

“The sick patients cost much more per day, of course,” the abbot said, sitting in his rust-brown robe before a large statue of Buddha. “But generally they would just stay for a month or so and die.”

It is good news that lives are being saved now, he said. “But long term, the person who is healthy costs more. He lives longer, he eats more, and he keeps on living and eating.”