Pattaya, Thailand -- One of the things dearest to the Thai hearts are religious icons; many of which also serve as magical talismans, believed to protect their wearers. One such is the Jatukham Rammathep amulet, which has caused such a fever of desire that a woman was recently crushed to death and dozens injured in an amulet coupon buying-frenzy in several southern schools. 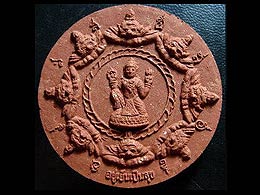 Not only were death and injuries caused, but the estimated 10,000 + crowd wreaked havoc, destroying property and defeating the police’s efforts to control them. But, ironically, the sale of these amulets has also brought an economic boom to the south, and traffic chaos as adherents flock to the temples to acquire these talismans.

The origin of the name Jatukham Rammathep is lost in the mists of time. However, several theories exist as to where the name comes from. One of the most credible is that Jatukham Rammathep is, in fact, two names, aliases of brother princes Inthara Sairen and Inthara Khao Kheo, sons of King Jantharaphanu, who ruled Sri Thammasoke, the capital of the Krung Srivijaya Kingdom (757-1257). The two princes were elevated to the status of guardian angels after their deaths. Alternative speculations also give other royal origins to the amulet’s name, including as a pseudonym for King Jantharaphanu, himself.

However, despite the Thai propensity of elevating their royalty to virtually divine status, similar to the Ancient Egyptians, religious figures claim precedence. One in particular is that of the Avalokitesvara, who some claim is the most deserving of the title, Jatukham Rammathep.

At the time of the origin of the legends surrounding the amulet, Southern Thailand was under the sway of Mahayana Buddhism, as opposed to the current form, Theravada Buddhism. The significant difference between these two Buddhist traditions is that Mahayana Buddhism is far more altruistic, the Boddhisattvas renouncing Nirvana until the last struggling pilgrim has attained the exalted state; whereas, under Theravada Buddhism, the onus is upon the quest for individual Nirvana. Accordingly, as Avalokitesvara is one of the personages of Mahayana Buddhism, if he is indeed the rightful titleholder, the amulets’ magical power would be considerably greater.

The Jatukham Rammathep amulets were first made in 1987 under the auspices of Nakhon Si Thammarat’s Holy Pillar Shrine. The Pillar Shrine Committee must approve the amulets’ production and they must also be blessed under a Brahminical-Buddhist ceremony at the Holy Pillar Shrine or Mahathat Woramaha-wiharn Temple.

The original 1987 amulet was circular with a 5 cm diameter and cost 39 Baht.

Today, the amulets sell for between 200 and 500 Baht for the basic version and as much as 1,000 Baht for limited edition amulets. There are now in excess of 400 different models and over 200 editions on the market. Due to the pressure of demand and must-have status, however, the value can rise astronomically, by up ten times their original selling price, in normal circumstances. However, the highest price for a single amulet is reported to be 1.2 million Baht, with an unconfirmed claim of 3.2 million Baht paid by an American.

So great is the demand for this “magical” amulet that its sale has created a mini economic boom for Nakhon Si Thammarat. With an influx of 10,000 + Thai and a considerable number of foreign visitors flooding into the Southern province daily, the 6,000 available hotel rooms are regularly fully booked, and an estimated 100 million Baht is poured into Nakhon Si Thammarat each week; all because of this notorious amulet.

Followers worship Jatukham Rammathep statues at Wat Phra Mahathat Woramahawiharn or Wat Phra Nakhon, while amulet creators from across the country use the temple as a location to recite incantations over the amulets.