Thailand: Not in need of 'status crutch'

Bangkok, Thailand -- The decline in morality and continued disarray of Buddhism over the past several decades have prompted many Buddhists to try to strengthen the religion. One of the measures has been a call that Buddhism be declared the official national religion in the new constitution, whose first draft will be finished today. 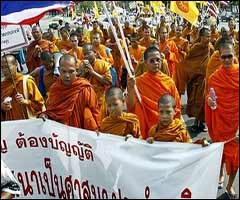 In the past, Buddhism was an inseparable part of Thai life, history and culture. Today, however, Thai people live a life that is increasingly separated from Buddhist teachings. The proof is in the sharp rise in crime, widespread corruption, domestic violence especially against women and children, proliferation of gambling, promiscuity and the unprecedented obsession with occult practices and talismans.

All these raise the question: Is Buddhism still part and parcel of Thai life?

There is nothing wrong with the campaign to name Buddhism as our state religion. The problem is that we can't make it true by writing a passage down in the constitution.

Suppose we had a new constitution with Buddhism codified as the state religion today, do you believe that crime, rape or corruption cases would go away? Do you believe Thailand would cease to be a paradise for the flesh trade? Do you believe people would stop killing one another?

The only difference would be an increased sense of puzzlement among foreigners or people who uphold different religions: if Buddhism, which preaches compassion and peace, was made the national religion, why were Thais still doing violent and vile things?

It does not take a clause in the constitution to make Buddhism our state religion. What it takes is a return of the Buddhist teachings into the hearts of the people.

While the government's support would be necessary to realise the mission _ an issuing of legislation to correct structural flaws and a provision of financial assistance or capable personnel - it is not as important as cooperation from the Sangha Council and the general public.

Among proponents of the state religion status, an argument seems to prevail that Buddhism is in decline due to lack of state support, thus the proposal that the national status would help. Some urge that the government allocate more budget to Buddhist organisations or activities.

But do these organisations suffer from poverty?

The answer is, not at all.

The Sangha Council and temples around the country receive massive amounts of donations from the public. Where does the money go? To buildings, mostly. A hundred million, or sometimes a billion baht, can be spent on majestic chapels and temples, but little can be found to sponsor education for monks and novices, or to organise courses on moral ethics for youngsters. The irony is that whereas some urban temples have in their coffers billions of baht, many rural-based ones struggle with scarcity _ some cannot provide enough food for their monks and novices.

The problem with Buddhism, therefore, is not the lack of support from the government but the lack of awareness among Buddhists of all levels of the woes within. Try contemplating these questions: How much better Buddhism would be if richer temples were to help with or sponsor the education of monks and novices from poor, rural temples? How much in terms of Buddhist education would we have gained from the money that goes straight into the construction of grandiose edifices or the making of talismans?

The responsibility lies at all levels, starting with the Sangha Council, the Buddhist clergy's governing body. For the record, the education of monks is at a crisis stage. More than 80% of monks and novices flunk either the Dharma or Pali studies while 100,000 of them do not have the chance to study for the entry-level Nak Tham Tri Dharma examination. This is not to mention the quality of the education. At present, each temple is responsible for the education of its monks. The Sangha Council only takes care of the examination. Even though repeated calls have been made that a reform of monks' education be conducted, the council has consistently ignored them, despite its having the full authority to do so.

Under the circumstances, there is little the government can do or contribute.

King Rama V actually once tried to initiate a reform in monastic education. The King established the Maha Mongkut Buddhist University and Maha Chulalongkorn Buddhist University with the hope of educating monks so that they could give guidance to people in a rapidly changing world.

Even though the King's attempt was fully supported by his brother, Prince Wachirayarn, then abbot of Wat Boworniwet and head of the Dhammayudh Sect, the overhauling and upgrading of monastic schools and curricula was stopped after a few years because of opposition from senior monks, who viewed that monks had no business learning about new things or the secular world.

The push for Buddhism to be labelled a national religion stems from the belief that its stability _ even prosperity or decline _ hinges mainly on the government. But has the government shown any achievement in that respect? Can it take care of even basic problems such as making temples alcohol-free zones? Even though it is against the Five Precepts to drink alcohol, it is common practice in many temples during festivals. It seems only the local monks and communities are in a position to tackle such a problem, but apparently they can't. Why? Because monks have become weak and the communities complacent.

Now, do we think that if we write in the constitution that Buddhism is our national religion, we will rid our temples of alcohol?

So far, we have covered only problems regarding monks. However, a big part that contributes to the suffering of Buddhism has to do with the decline in people's morality. The best the government can do in this regard is to force children to study more moral courses or the general public to listen to more sermons _ the usual stints that have proved a miserable failure in instilling moral ethics in people's minds. Indeed, what the government can do to strengthen people's morality is to come up with measures, both legal and institutional, that will prop up the much-weakened family institute.

But these are measures we can actually push forward or achieve without having to designate Buddhism as the state religion in the charter. Being Buddhist is in the mind and conduct. It is not in a label or brand.

Indeed, the labelling, if allowed to go through, would put a blind on these problems and prevent them from being properly addressed. Why? Because the Buddhist communities would then have an excuse not to do anything and shift the responsibility to the government _ it's the state religion, isn't it?

There is a major concern that the designating of Buddhism as the national religion would cause a religious rift in the country, where about 5% of the population belongs to other faiths. The feared belligerence would not occur if we all followed our religious faith with an open mind. The reality, however, is far from ideal. The reality is many groups of people are so absorbed in their own beliefs that they can't open their minds to different ideas or perspectives. This is especially true when fervent nationalism is brought into play.

We have witnessed people who issued personal threats and curses against academic scholars who argued that the first stone inscription may not have been made by King Ramkhamhaeng of Sukhothai as believed. We also saw public harassment against the academic who questioned the existence of legendary figure Thao Suranaree. Some people still protest against women entering the inner sanctum of the chedi where sacred relics are enshrined. These events happen so frequently that they call into question whether Thai people still practice tolerance as taught by Lord Buddha?

The drop in tolerance would not be a healthy background for the designation of Buddhism as the state religion, as the move would inevitably make people equate being Thai with being Buddhist _ a dangerous idea that could lead to discrimination against people of other religions as well as those of the same faith who happen to think differently.

With such a concept in mind, it would be easy to fall into the ultra-nationalist trap of calling those who do not support the state religion move _ or in future any move to benefit Buddhism at the expense of other religions _ as being un-Thai. The trap has proved to be the trigger that tipped conflicts into bloodshed in the past.

On this note, it is important now that both proponents and opponents of the state religion campaign start to show tolerance and stop condemning people who support different ideas.

The thing is, differences of opinion have become a normal thing in the present. We have to live with them. And the only way we can live with all these opposing ideas and campaigns is to practice tolerance.

There is an anecdotal story about Dr Bradley, an American missionary who came to Bangkok during the reign of King Mongkut to proselytise Christianity. One day, Dr Bradley stopped by a shop selling Buddha images and started to condemn the worship of a Buddhist icon. As this is a tropical country, Dr Bradley got tired after a while. The shop proprietor sympathised with the tired missionary and so invited Dr Bradley into the shop to sit down and rest. Then, he inquired why Dr Bradley thought so. Dr Bradley was very impressed that the shop owner did not show animosity back to him, so he wrote the story down as a record.

What the shop owner from the reign of King Rama IV did represents what religious tolerance is and what it's like to have Buddhism enshrined in our minds. And if Buddhism is firmly rooted in our minds, there is no point of writing it down in the charter.