Pattaya City gets ready to celebrate Wisakha Bucha on May 19

Pattaya, Thailand -- Pattaya City is making preparations for Buddhism‘s most important festival, Wisakha Bucha Day, May 19, 2008, (the anniversary of the Lord Buddha‘s birth, enlightenment and entry into nirvana, or paranirvana, to be precise) by holding a Meditational Run and Procession. 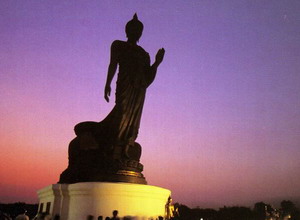 The activities will focus on observing the five Buddhist commandments and refraining from all vice. There will be collaboration between Pattaya City Council, clubs, societies and the people of Pattaya to celebrate the event. Activities will start at 4.30 pm, with sixty Buddhist monks being invited to pray for the auspicious ceremony, with a dedication to His Majesty the King on the occasion of his 80th birthday. After the prayers and a sermon at around 5pm, athletes will start a Meditational Run and Walk.

The winner will receive a trophy and any participants who reach the finish line will receive a sacred coin and a Dharma book, to be presented by Mayor of Pattaya City. There will also be a Buddhist ceremony afterward at around 6.30 pm

In addition, all participants and Buddhist monks will join in procession to walk from Pattaya Hill Public Garden to Chai Mongkol Temple, where the procession will circumambulate (circle) the temple three time, with each carrying flowers, three glowing incense sticks and a lit candle in silent homage to the Triple Gem, i.e. Buddha (the Great Teacher), the Dhamma (the Truth) and the Sangha (the community of followers).

This triple circumambulation ceremony will be repeated at all the wats (temples) throughout Thailand and is a marvellous opportunity to make merit. Wisakha Bucha (or Puja) Day, falls on the full moon of the 6th lunar month. Agriculturally, it is the season of seeding and ploughing, and on this day the workers leave the fields to participate in the circumambulation ceremony. Shortly after transplanting is completed, the rainy season, with its annual monsoons, arrives to inundate the farmland. Daily rainfall refreshes the fields and much of the family's time becomes occupied with the holy Rains Retreat (Phasa in Thai), observances.

During the annual, three-month Rains Retreat, Buddhist monks remain in their monasteries overnight. In a tradition which predates Buddhism, in Ancient India the monks gave up their itinerant habits and instead remained in permanent dwellings, avoiding travel across fields so as not to tread on the young plants In deference to popular opinion, the Buddha decreed that his follows should also abide by this ancient tradition.

This marked a movement towards a more permanent, communal life and the establishment of Buddhist monasteries and temples, especially in countries to which the young religion had spread.

Phansa (lent) is a time of spiritual practice; a time to emulate the Buddha. Specifically, it concentrates on Bhavana (meditation) or development of the mind, working from a base of morality (Sila), together with the development of concentration (Samadhi) and mindfulness (Sati). This practice enabled Siddhattha Gotama to become a self-awakened Buddha and many of his noble disciples to become Arhats.

Accordingly, ever since it has been the period, when the monkhood becomes more spiritual vigorous, meditating, studying and teaching more. It is also the time young men enter the monkhood to become temporarily ordained and receive spiritual training, to gain merit for themselves and their parents, and achieve maturity, after which marriageable girls will regard them as fit persons to marry.

The Buddhist ordination is a mixture of religious solemnity, merit-making and boisterous celebration, reflecting a Thai belief that the three most important events of a man's life are his birth, ordination and marriage. Socially, the ordination of the young novice-monks is an opportunity for the whole village to join in celebration. Village monks represent the presiding chapter and act as preceptors. Villagers gain merit and they and small children accompany the tonsured, white-robed candidates for monkhood in a lively procession to the monastery, marked by joyous dancing and deep beat of long drums.

Laymen, too, during this traditional holy season, attempt to be more conscientious in following the Buddha's precepts, renouncing hard liquor, cigarettes and other vices, and try to be better people and donate both financial and physical support to their local monasteries.