Bangkok, Thailand -- The United Nations has declared Thailand "world centre of Buddhism", while at the same time calling upon member states to celebrate the day of Vesak as "international Buddhism day". 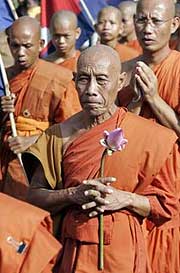 << More than a thousand religious and students of Buddhism met in Bangkok to celebrate the birth of Buddha and the proclamation of the international day dedicated to their religion. Moments of reflection on the earthquake in China, and on the cyclone in Myanmar.

To celebrate both of these events, more than a thousand religious and scholars of the religion, from 25 different countries, met in the UN conference hall in Bangkok.  The celebration commemorates the birth and illumination of the Buddha, and is celebrated by all the branches of Buddhism.

The monk Somdejphrabuddhajarn, who participated in the name of the Buddhist patriarchate, says: "This assembly brings us happiness amid the tragedies of the cyclone in Burma and the earthquake in China. Nonetheless, these disasters demonstrate the importance of working to help the victims, and are a good example of how Buddhist teachings are relevant and necessary for bringing harmony and peace to society".

The venerable Phradhamakosajarn, rector of the Buddhist academy of Chulalongkorn and president of the commission instituted for the commemoration of Vesak, adds: "During the recent meeting in Hanoi, Vietnam, on the occasion of Visakha Puja Day, we discussed how anything can happen at any time, so Buddhists should develop their consciousness and mind to accept their destiny".

The heart of the feast of Vesak is based on four "noble truths": suffering, the cause of suffering, blocking suffering, and how to stop suffering.  In addition to charity and gratitude toward the elderly, parents, and teachers, the faithful are asked to reflect deeply on these themes.  For this reason, many monasteries invite young people to try religious life even for just a week, in order to reflect better and improve their understanding.

About 90 percent of the 62.2 million citizens of Thailand practice Theravada Buddhism, brought to the country from India around the third century before Christ.  This branch is based on the Pali canon of Buddha's teachings, known as the Tripitaka (a sort of Bible of Buddhism).