Nan, Thailand -- Exquisite wooden Buddhist statues have been traded for a lone drum that was used for temple activities. 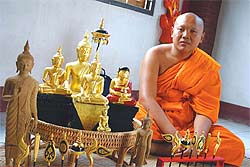 << Phra Sarawut Sukwatthano of Wat Suan Hom and his work, in Nan.

Buddhist manuscript chests, intricately crafted temple window frames and doors and other artefacts have been sold in order to modernise temples.

Ancient Buddhist buildings and temples have been wrecked and left as junk.

"For many people, development means to rebuild, not to preserve," said Dr MR Rujaya Abhakorn, who is a mentor to Unesco's Cultural Survival and Revival in the Buddhist Sangha Project in Nan, a northern province of Thailand.

"Government offices don't have enough budget to preserve the heritage. There is a shortage of local craftsmen. Monks have other concerns," he said.

Nan has long been a Buddhist centre since the 14th century, if not earlier. It has cultural and artistic links to Sukhothai, Chiang Mai, Chiang Saen, Yunnan and northern Laos.

From the 17th to the 19th century Nan was a Tai-speaking people's cultural cross-road, with communities of Tai Yuan, Tai Lu, Lao and Phuan migrants scattered across the province.

When it was integrated into the new Siam with Bangkok in the early 20th century as the political centre, the influence of the central Thais' religious traditions and architecture also became dominant in Nan art and culture.

This development of cultural diversity, combined with the economic influence from Chinese merchants and the Shan and Burmese teak loggers from British Burma, has enriched Nan with a unique artistic heritage.

Montira Horayangura Unakul, programme specialist of the Office of the Regional Adviser for Culture in Asia and Pacific at Unesco Bangkok, said Nan was selected by Unesco to take part in the revival project because of its unique Buddhist arts and culture.

The Cultural Survival and Revival in the Buddhist Sangha: Documentation, Education and Training to Revitalise Traditional Decorative Arts and Building Crafts in the Temples of Asia project was initiated by Unesco in 2000 with support from the governments of Norway and New Zealand.

It aims for heritage conservation through revitalising traditional artisan skills, in particular among religious communities such as Buddhist monks.

"The ancient knowledge will probably disappear in five or 10 years if we don't start preserving it now," said Montira. "Although monks have changed their roles in modern society, they have always played a significant part in preserving cultural heritage, especially temples. They live in temples and directly own the artefacts. So it's necessary to build awareness among monks first, then the community after.

"Awareness-raising is needed to create a sense of belonging, which helps safeguard the heritage. Local people need to acknowledge what they have at hand and learn their roles, both directly and indirectly, in what they should and could do with the heritage," she said.

The project was developed in response to a request from Buddhist communities for assistance in maintaining religious heritage. It has been implemented at 19 sites in eight countries in the Asia-Pacific region including Cambodia, China, India, Laos, Mongolia, Nepal, Sri Lanka and Thailand.

Nan is one of the sites in Thailand under consideration for World Heritage status. The project has helped build local awareness of heritage in Nan.

The training of monks and laypersons in Nan was divided into two tracks. A 60-hour short course educated over 70 monks and laypersons in the general area of Buddhist arts - covering such topics as the significance of traditional local Buddhist artistic practices and rituals, the significance of Buddhist religious architecture and architectural forms, Nan Buddhist art and craft traditions including awareness-raising and preventive conservation, how to inventory Buddhist artefacts in temples and how to assess the condition of temples.

Both courses were organised by the Nan Non-formal Education Centre, which sets a new precedent for training in traditional crafts that has been formally certified by the Ministry of Education. Expert input from both local master craftsmen, professors at the Fine Arts Faculty of Chiang Mai University and teachers from the Kanchanaphisek College in the Court provided a combination of both traditional wisdom and rigorous academic guidance in developing these courses.

Phra Sarawut Sukwatthano of Wat Suan Hom in Nan said even though a number of monks expressed an interest during the training, they found it hard to manage their time to attend the workshop.

"Some people say it isn't the monks' business to attend the Buddhist arts preservation training. They expect us to stay at the temple and perform what they see as the monks' duties," he said.

"But as Thai people, if we don't help safeguard our own heritage, who will?

"Many ancient Buddhist artefacts and buildings have deteriorated due to a lack of knowledge. Neither abbots, monks nor the local villagers realise their important roles in the process of preservation.

"People these days are not interested in being craftsmen or artists. They are busy making a living. At least as monks we can give guidance and suggestions when visiting different temples and transfer the knowledge to those interested and to the local community to help preserve the Buddhist arts," added Phra Sarawut.

Besides the training, three books on Nan's Buddhist artistic traditions have been produced for use as teaching materials and reference documents. The 80-page Nan Crafts Cookbook documents the process of producing traditional crafts with detailed illustrations and step-by-step instructions.

The Style Book of Nan Buddhist Arts and Crafts contains, for the first time, over 300 computer-generated illustrations of significant Nan arts and craftsmanship selected from masterpieces at 14 temples. The book contains 300 pages.

Inventories of 618 building decorations and collections of Buddhist statues and artefacts in 14 temples are documented in over 1,000 pages. The three books will be distributed at schools, temples, universities and craft training centres.

A course in Nan arts and craft heritage will also soon be introduced in 37 Nan secondary schools using materials from the Cookbook and the Nan Style Book. Students in Nan will then be able to discover and appreciate their cultural heritage.

Somjate Wimolkasem, a teacher of Satree Srinan School in Nan said the project will be sustained by educating future generations.

"The culture of a number of communities has dissipated because their people don't preserve their resources properly.

"Visitors come to Nan because they long for the beauty of the past. The cultural heritage of each community lies in the hands of its people, not with any individual or particular organisation," he said.

Sarawut Roopin, a Chiang Mai University graduate in Thai arts and regional studies and also a project co-ordinator, said it would be sad to see Nan become like his hometown Chiang Mai.

"If compared to a woman, Nan is a timid naive girl while Chiang Mai is a beautiful lady who is losing her charm. Historically ignorant development could have tremendously negative side effects."

Crafts training courses, with support from the Nan Non-Formal Education Centre, are now being expanded through temple-based training centres in six districts out of 15 in the province, and are open to the public.

"When people learn about their past, they can bring it to the present to protect their identity. And when making decisions about the future, they can apply wisdom they learn from their cultural heritage," Panchawut Thongmool, a deputy director of the Nan Non-Formal Education Centre, said.