Bangkok, Thailand -- Thai human rights activists led by the Union for Civil Liberty (UCL) have been organising a series of seminars with religious leaders throughout Thailand to raise their awareness and discuss their perspectives on the abolition of capital punishment. 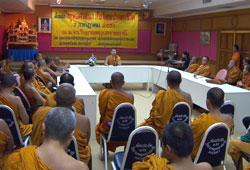 Four meetings on religious support for the abolition of the death penalty have taken place in the past weeks at different locations in Thailand, with one more seminar scheduled in August. Between 25 and 80 people attended each of the events.

Buddhist monks and academics joined lawyers and human rights activists in Chiangmai on June 30, in Ubon Ratchathani on July 7 and in Bangkok on July 15 and 16, while Muslim representatives and scholars attended another seminar on July 12 in Bangkok. Discussions also took place between the UCL and Christian clerics.

Most of the Buddhist monks who attended the seminars said that they had not given much thought to the issue of the death penalty before, as it is important for them not to get involved in political issues. However, when confronted with the reality of capital punishment, they deemed it incompatible with Buddhist principles.

Although Buddhists believe that those who behave badly will be punished, they reject any form of killing. They also promote the reformation of human beings who have committed evil acts, as illustrated in the story of Angulimala – a murderer who repented and became a monk after meeting the Buddha. “If we wish to promote Buddhism, and are Buddhists, we should abolish the death penalty to follow the Buddha,” said one participant.

However, many expressed doubt that Thailand's society and legal system could get rid of the death penalty quickly, and made the point that the abolition of capital punishment should be part of a wider effort to reform society according to Buddhist principles.

The participants in the seminar on Muslim perspectives, which took place at the Foundation of the Islamic Centre of Thailand, stressed that the death penalty in itself could not be abolished according to Islamic law. A legal scholar explained that capital punishment is enjoined in the Koran by the word of Allah and cannot be challenged. Although they disagreed with the Buddhist view that individuals can reform themselves, they shared the Buddhist view that “compassion and loving kindness” can lead to mercy.

A discussion took place on the Muslim practice of commuting a death sentence after the payment of compensation if the family of a murdered victim approve, and on the need for  undeniable evidence involving four witnesses before a death sentence can be passed under Sharia law.

A Muslim scholar later said that he would have no difficulty with the idea of a moratorium on the death penalty in the present rule of imperfect law.

“Monks have a great influence”

Danthong Breen of UCL said that the idea of the seminars came after an FIDH report three years ago found that Buddhist monks, while opposed to the death penalty in principle, never discussed the issue.

The project was conforted by discussions with high-ranking government officials, who considered the abolition of capital punishment but did not want to go against popular support for it.

“How do we get to the people? Monks have a great influence”, Danthong Breen recalled thinking. In the past two years, he sought funding for the series of seminars and obtained it from the European Union and the French and Dutch governments.

He was impressed by the effect information and discussion can have on participants. “Most came in 100% supportive of the death penalty, and we managed to turn many of them around within the day”, he said.
An unexpected consequence of the project was a boost to the morale of those sentenced to death. “I visited a death row prisoner who was fascinated and asked me to get material about the seminars for him and the other prisoners”, Danthong Breen said.

Following the initial series of meetings, UCL is planning to organise a large number of smaller events throughout the country. “It would be a two-hour programme with a multimedia presentation showing what an execution looks like, as many people do not know about it”, he said.

Danthong Breen is now looking for funding to develop that second part of the programme and hopes to enrol other NGOs and some of the participants in the initial seminars as speakers to lead discussions in Buddhist temples, mosques and churches throughout Thailand.