Saraburi, Thailand -- THE clinic has what might be the most radical drugs detox treatment centre in the world. Reforming addicts pay just €2 a day, and are encouraged to swallow vile potions by Buddhist monks and engage in ritual vomiting to the beat of rhythmic drumming. 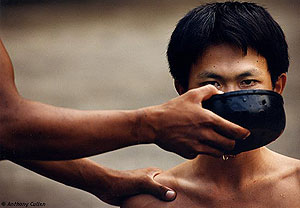 Tham Krabok, a Buddhist monastery in Thailand, is attracting a growing number of Irish drug users and alcoholics who want to beat their addictions. The monastery, which began treating drug addicts in 1959 as part of Thailand’s fight against opium addiction, admits scores of Irish people every year.

Several are brought out by Gary Devine, a former drug addict from south Dublin. “The number is growing all the time because there are not enough detox facilities on offer here,” he said. “Tham Krabok admits everyone. That’s why people with no money are boarding planes and flying 6,000 miles to the southeast Asia to get help.”

Devine himself underwent treatment for drug addiction at the monastic settlement in 2005. “The treatment offered at Tham Krabok is radical but it works. The monks do not believe heroin addicts should be weaned on to methadone or other drugs. They believe in cleansing the body as fast as possible and showing addicts that they can have a future,” he said.

The monastery opens its gates to every kind of substance abuser including those addicted to alcohol, cocaine and cannabis. On arrival, patients surrender their possessions and are given pink cotton pyjamas to wear for the duration of their stay. The treatment programme begins at dawn the next morning when patients are given a small vial of dense black liquid to drink. This “magic potion” is made from 109 herbs and barks gathered in the jungle and is said to taste disgusting. Once it is swallowed, the patient is forced to drink several litres of water and projectile vomit while the monks chant and beat drums.

Addicts repeat this routine at dawn for five days and then do a week’s work, relaxation and contemplation under statues of Buddha. Patients are also asked to take a satya, or spiritual vow, that the monks credit with the centre’s 65% success rate.

Tham Krabok, which means Temple of the Bamboo Cave, is 90 miles north of Bangkok, in Saraburi province, central Thailand. About 40% of the monks are former addicts who detoxed at the encampment, and their ranks are said to contain reformed criminals and former Vietnam war veterans.

So far, they have treated up to 100,000 addicts. Among them were Pete Doherty, the singer and former boyfriend of Kate Moss, and Christy Dignam of Aslan, the Dublin rock group.

Audrey Delaney, a mother of two from Virginia in Co Cavan, travelled to the detox centre in August in search of a cure for her addiction to prescription drugs. She says she underwent the full privations of drug withdrawal, including vomiting and sweating.

“Before I left Ireland I couldn’t sleep without taking tablets. I knew I couldn’t live like this forever so I saved up and went to Thailand,” said Delaney. “I came back a new woman. I cleansed my body. I also learned to sleep soundly every night. The monks and nuns taught me to meditate and reflect on the way I was living my life. It worked for me.”

Residential treatment at the monastery costs much less than similar care in Ireland. A five-week stay at a private detox clinic in Dublin costs about €10,000. At Tham Krabok there is just a daily fee of €2 to cover food and costs.

Ciara Moen, a project manager with Cross Care, a charitable organisation which helps homeless people and drug users in Dublin, says it makes practical and financial sense for Irish charities to send “clients” to Thailand for detox treatment.

There are an estimated 14,500 heroin addicts in the Dublin area, with 8,000 on methadone maintenance programmes. Securing admission to residential treatment centres is almost impossible with only 31 hospital beds on offer.