The eye of the tiger

Determined abbot maintains popularity of his Tiger Temple amid controversy

Kanchanaburi, Thailand -- A journey to Buddhist temples in Thailand does not necessarily have to be only for merit making or dharma practice. At Wat Pa Luangta Bua Yanasampanno Forest Monastry in Kanchanaburi province, visitors feel like they are in an open zoo. 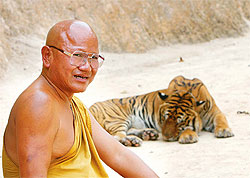 While walking in the temple grounds, visitors will run into countless peacocks, bulls and wild boar. The highlight, however, is the chance to get up close and personal with a tiger.

While other animals walk freely in the temple grounds, the tigers are on leashes and chained when they are public areas.

Widely known as the Tiger Temple, the monastry became famous worldwide in 2004 after western media outlets such as Animal Planet began airing stories about the Buddhist monks who take care of abandoned and orphaned tigers.

At first, the temple was open for free. But as the tigers mated and kept producing cubs and the temple kept receiving stray wild animals, the entrance fees were introduced to keep up with rising expenses.

According to the temple, animal feeding costs 20,000 baht a day, while daily staff salaries cost 12,000 baht. The temple charges 300 baht entrance fee which includes an afternoon show. It also offers a separate private session for visitors to take care of a tiger, which costs 4,000 baht.

Anyone is still welcome to attend the temple's Buddhist service in the morning. Hence, the temple is able to maintain its dual role as a spiritual and animal sanctuary.

There are only seven monks in the temple which is home to thousands of animals, including boar, peacocks, bulls and 30 tigers. Each tiger has a name, some of which are Hern Fah, Chom Napa, Darika and Payu.

However, tigers are not the only tourist attraction at the temple. Controversial abbot Phra Archarn Phusit (Chan) Khantitharo, or Luangta Chan, also draws attention and crowds.

At 1pm, visitors see the abbot sitting with his tigers at the "Tiger Canyon" - a formerly deserted mine which has been converted into a stage for tiger shows.

During a typical show, the abbot looks over the tigers as they sleep or roll on the ground nearby. All are secured by chains. Two staff stand beside each tiger to ensure the safety of the tourists.

Once in a while, the abbot contacts staff via walkie-talkie. The temple has trained and hired 60 villagers to take care of the tigers.

Around the Tiger Canyon, hundreds of tourists - mostly westerners - line up to have their photo taken with one of the tigers, which costs 1,000 baht. For the photo sessions, tourists sit on the floor while a tiger-handler puts the head of a sleepy-looking tiger on the tourist's lap.

On average, about 300 tourists visit the temple every day. During the high season or on weekends, that number can easily rise to 800.

At 3pm, the tigers are woken up and paraded to their cages. At the head of tiger parade is Luangta Chan, holding the leash of Hern Fah - the temple's most famous tiger. Then, the abbot - who has just undergone heart surgery - leaves to his monastic cloister on a golf cart.

Hern Fah has been photographed on over 10,000 tourists' laps," said the abbot proudly.

"Look how much money this tiger has made. Indeed, the tigers in our temple are very rich and make their own living. They have plenty of food, and we hire staff to take care of them."

The abbot said he feels grateful to these tigers. "They are the ones who created the temple, facilities, local businesses and tourism for this area," he said.

Asked why the temple - supposedly a place for spiritual growth - has turned into a semi-zoo, the abbot plunged into a brief silence.

The abbot was former student of Political Science at the country's famous university, who over twenty years ago got sick with leukemia and miraculously recovered after entering monkhood. The abbot is a disciple of Luangta Maha Bua Yanasampanno, a highly respected forest monk.

"At first, our tiger care was motivated by compassion for the animals. All I want to do is to take care of these tigers the best as I can," said Luangta Chan.

Now the temple has become a big business. A foundation has been set up to handle the the temple's financial matters. The profits from the park are used meet various tiger maintenance costs - new infrastructure and maintenance of their environment, extra care (such as 3,600 baht for a tiger's dental plaque removal) and imported tiger supplement vitamins, he explained.

However, all this has not prevented the temple from being surrounded by controversy. In June this year, Animal Planet pulled the story of the Tiger Temple from their programming schedule and from their web site.

The move followed a report called "Exploiting The Tiger: Illegal Trade, Animal Cruelty and Tourists at Risk at the Tiger Temple" by Care for the Wild International (CWI), a UK animal welfare advocacy group.

The report painted the temple as villain from the accounts of wildlife activists disguised as temple volunteers from 2005 to 2008. The report accused the temple of trading tigers with a zoo in Laos, providing a document with the abbot's signature of approval as proof.

The report also described the tiger-handling by staff and monks as abusive. They include hitting the tiger's heads, using force to move them and using their urine to control their behaviour. It also warned that the tiger-watching at the temple was unsafe as the temple did not follow international standard and did not have well-enough trained staff.

The abbot denied all the allegations, saying the report had a hidden agenda.

"This place is like an open palm. Thousand of tourists with cameras came here to record all of our activities. We also have scores of volunteers who still keep coming. If we are that bad, this place would have been closed or we would have been arrested."

He laughed at the accusations of illegal tiger trade with a zoo in Laos, calling it a fictitious plot to destroy the temple. "Why would I do such things? We have plenty of money. Trading tigers would make less money and we don't need to buy because we breed tigers here."

It is not the first time the abbot and the Tiger Temple have met controversy.

In 2000, the temple was closed for lacking the proper licences to own tigers. Forestry Department Chief Plodprasop Suraswadi accused the temple of being involving in illegal trade and called the place unsafe. All the temple's animals, including the tigers, were confiscated and branded as state property.

Lacking facilities and funding, the Forestry Department - now the Department of National Parks, Wildlife and Plant Conservation - had to leave the tigers at the temple. The controversy resulted in free publicity for the temple.

However, the allegations of CWI were serious enough to prompt another round of investigation by the authorities.

Last week, the department's staffs went to the temple to collect DNA and blood samples of all tigers to make identity cards for all tigers to prevent illegal trade.

One member of the investigation team even said he was impressed by the way the temple handled the tigers.

"They seem to know and understand tigers' behaviour. These tigers have been in good hands."

The investigation, however, did not cover allegations on illicit trafficking and the drugging of tigers. However, the ID cards will prevent future trafficking, said Chatchawan, adding there is no plans to release the tigers into the wild.

"The authorities do not have the money and resources to take care of these tigers," said Chatchawan.

The controversy of the Tiger Temple echoes problems of profiteering and animal mistreatment in the so-called "Khet Apaiyatan", meaning the pardon zone, which temples lie in.

Many temples keep wild animals only to draw visitors. Lacking proper facilities and knowledge, such temples mistreat wild animals who end up having miserable lives, albeit unintentionally.

An elephant at Wat Peuj Udom in Pathum Thani province is a case in point. In 1995, the elephant ran wild after being tied with chains for over a decade. Police fired over 150 bullets to kill it to prevent it from attacking people.

Despite the controversy and ongoing debates about how to best take care of wild animals, tourists keep coming to the Tiger Temple.

Robert Steinmetz, director of the Conservation Biology Unit at World Wildlife Fund (WWF) questioned the future of the tigers if the abbot can no longer take care of them.

"My concern is the temple might end up becoming involved in illicit wildlife trading in the future,"he said.

The abbot seems prepared for the future. He plans to buy an additional 8,000 rai (1,280 hectares) of land to expand the temple-cum-zoo which now covers 600 rai (96 hectares). The abbot said it was his dream to give new born tigers a jungle-like environment to live in. Wildlife experts such as Chatchawan and Steinmetz call it a pipedream.

The abbot somehow seems to know the future of the tigers, at least for their next life. "These tigers are very lucky. Indeed, they are making merit. They do not have to kill to get food. They will definitely be reborn in a higher state of being in their next life."