Monastery built for her brother

Bangkok, Thailand -- Wat Pa Siriwattanawisuth, a Buddhist monastery under the patronage of Her Royal Highness Princess Galyani Vadhana, is located on a 96-rai plot of land on Khok Phen mountain in Nakhon Sawan's Tha Tako district. 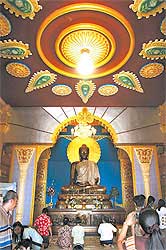 << A statue of Phra Buddha Metta Santiphap is placed inside the pagoda.

This monastery, which houses a pagoda resembling the sacred Bodh Gaya in India's Bihar state, was built as a gift by the late princess for her youngest brother - His Majesty the King - and has taken on a new mission of training young Thais and teaching them to have strong faith in their nation, religion and the monarchy.

The monastery's name was changed in 2005 when it received permission from the Supreme Sangha Council to be called Wat Pa Siriwattanawisuth.

Its abbot at that time was Phra Thepmolee.

The abbot, whose ordainer was Somdej Phra Maha Weerawong who had also once ordained His Majesty the King into the monkhood, had worked hard to put Buddhist architecture in place in the temple.

Most architecture and symbols in the temple are intended to emphasise the cultivation of Buddhist beliefs and pride in Thai identity and the Thai way of life.

Visitors walk up the stairs to the huge pagoda.  Designated as a royal residence, the building will be transformed into a museum to display the late princess’ work and contributions to the kingdom.

Usakorn Chantharawong, a member of the temple's executive board, said the temple's main activities, besides ordination ceremonies for groups of people from different professions as part of merit offerings for the late princess, include other memorial activities in honour of her as well as training programmes for young people.

Jaksurak Jantharawong, who wrote the temple's guidebook titled Nava Dharm (Dharma vessel) and also worked as a temple guide, said the temple had already trained some 50 volunteer guides on all the important architecture in the wat so they could guide visitors through the place and pass on relevant information.

A significant landmark in the temple is the Jedi Srimaharaj, which features statues of all the Thai kings recognised as great kings for their contributions to the country.

Another landmark is the Thepsathit Viharn, which was built in remembrance of the late Her Royal Highness the Princess Mother.

Enshrined in the Thepsathit Viharn are images of gods believed to have influence over human destiny, said Mr Jaksurak.

But the most important landmark is the Jedi Sribuddhakhaya, the pagoda resembling the Bodh Gaya in India. It is intended to be the centre of World Visakha Pucha Day celebrations and to mark His Majesty the King's 80th birthday as well as the 60th anniversary of His Majesty's accession to the throne.

"Before the princess passed away, she was shown a model of the Jedi Sribuddhakhaya, which representatives of the temple's executives presented to her. The princess later presented it to His Majesty the King," said Mr Jaksurak.

Col Usakorn added that the temple has plans for year-round activities in the future.