Is one of Thailands triple gem losing their gleam?

Nakhonratchasima, Thailand — Thailand’s highest Buddhist organization, the Supreme Sangha, is one of the three jewels described in Buddhism. The three – the Lord Buddha himself, the Dharma doctrine, and the Sangha clergy – are the three pillars that practicing Buddhists found their faith upon. 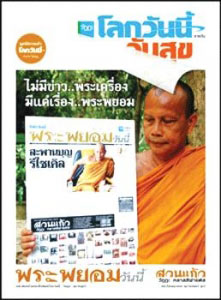 << Phra Phayom, abbot of Wat Suan Kaew temple, on the cover of a publication propagating Buddhism in Thailand. Hosting TV programs, radio broadcasts and engaging students, religious leaders and laypersons in discussions on Buddhism and how to live life, Phra Phayom is currently caught in the middle of a controversy that may decide how much influence a former prime minister continues to wield.

That is, they used to.

Today, as Buddha warned over 2,000 years ago, “enemies” of Buddhism are creeping in from the inside.

Loss of direction is hardly a new issue to those of any faith around the world, and Buddhism is no different. Many adherents of basic Buddhism branch off, in practice and principle, to either found their own sect or to follow an already established one that does not adhere to original Buddhist teachings.

The use of amulets is such an outgrowth, as is the worshipping of Buddhist images. Buddha did not advocate either of these, nor did he likely suspect that millions would later worship his image, but betray his teachings.

In a sense, Thai Buddhists today are very similar to the traditional image of practicing Catholics – they go through the motions, but then get on with life. It is still being taught that life itself should encompass original Buddhist teachings, but the variants are many. Take the Wat Suan Kaew temple in Tambol Banglaen, Nonthaburi province, for example.

Wat Suan Kaew was originally named Wat Kaew. It had been abandoned and remained that way for some 80 years before monk Luang Pho Thien and two or three other monks entered the grounds and attempted to look after the spacious temple and grounds. They were unable to do so and were then approached by Phra Phayom Galayano and a couple of other monks who asked to help take care of the grounds. One thing led to another, and Phra Phayom Galayano was given custody of the temple and became the abbot there when the former abbot left for Loei province.

Phra Phayom Galayano is and has been a monk unafraid of controversy or identifying those who are, in his opinion, causing it. He has an aura of calm yet ready-to-pounce energy, seems fond of public praise and is, in study and practice, a serious practitioner of Buddhism. His bent, however, often takes him to the periphery of politics, where his comments and other involvements, including hosting politically based events, are seen as divisive or, at best, a departure from the realm of religion and into the worldly one of politics.

Recently, Phra Phayom Galayano found himself at odds with Thailand’s Supreme Sangha Council, because he scheduled a Nov. 23 phone-in from the country’s ousted and convicted-for-corruption former prime minister, Thaksin Shinawatra. Another Thaksin phone-in is scheduled for Dec. 10, five days after the king’s 81st birthday, and then the show, Kwam Jing Wan Nee, or The Truth Today, is scheduled to hit the provinces. The objective: as Thaksin puts it, “I am being pushed into a corner and will now fight back.”

So, the huge question arises of whether a former national leader who was convicted of corruption, who was previously nonchalant as he led a war on drugs that killed over 3,000 victims – none of them the many police involved in drugs – and who has hidden to date the exact details of how a southern Muslim lawyer was kidnapped and killed, should be given a platform in the middle of a Buddhist temple in Thailand to make his case.

The Thai Supreme Sangha is seemingly saying no, but in the past, its limp-wristed methods of dealing with high-profile monks and abbots has led to pro-ruling party support. For example, Luang Pho Khun, one of northeast Thailand’s two most famous abbots, has in the past publicly expressed support for Thaksin and the Thai Rak Thai party, asking voters to cast their ballots for the party.

The Sangha remained silent at the time, likely due, in part, to the fact that Thaksin was still holding the reins of power. The other famous and more revered northeast abbot, Luangta Mahabua, in Udorn province, had himself decried Thaksin’s corruption and influence on society, to little avail.

There are Thais who feel, and privately say, that many Thais love Thaksin and not the king. Even Sondhi Limthongul, the media firebrand, has said it publicly. When Sondhi spoke, he was attempting to drive a royalist wedge between pro- and anti-Thaksin forces, but instead underlined an instability that is beginning to alarm even relatively apathetic observers.

That instability is founded on repression and expression, on loyalty to royalty and belief in God versus having to live life. When major religious leaders like Phra Phayom are willing and able to host politically seeded gatherings, when seeds of suspicion have to be sown by the ruling elite to question eligibility for citizenship when expressing unpopular views, when the Thai police have such latitude that they can literally arrest anyone for lése majesté solely on the basis of having been deemed to have committed it, then the wedge being driven amongst various factions is not merely a wedge of division but one of imminent change.

Like the pointed and heavy steel wedge used for log-splitting, the Thai wedge of social change threatens to split society into permanent independent factions. If Thailand were a communist nation, this split would be totally unacceptable.

But the country purports itself to be based on democracy. In so doing, it must accept intrusions into previously held conceptions that currently limit legitimate free speech and undermine human rights in the country. Even where religion and politics encounter one another, such as at Wat Suan Kaew, and when a religious leader such as Phra Phayom choose to host speeches that are unpopular with the government, the repressive mechanisms of the state must let go and allow the free flow to occur.

----------------------------
Frank G. Anderson is the Thailand representative of American Citizens Abroad. He was a U.S. Peace Corps volunteer to Thailand from 1965-67, working in community development. A freelance writer and founder of northeast Thailand's first local English language newspaper, the Korat Post – www.thekoratpost.com – he has spent over eight years in Thailand "embedded" with the local media. He has an MBA in information management and an associate degree in construction technology. ©Copyright Frank G. Anderson.