Tigers at Thai Temple Drugged Up or Loved Up?

Monks Deny Conservationists' Claim That Animals Are DruggedKANCHANABURI, Thailand -- Deep in the heart of Western Thailand, where the River Kwai weaves through the rich green jungle, the monks of the Wat Pa Luang Ta Bua Temple are beginning their day. 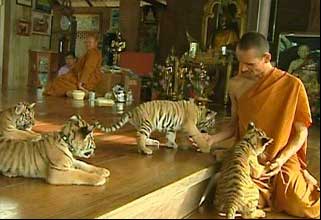 They walk through the town and collect alms from the locals. But back at the temple for breakfast and prayers, it's clear that this Buddhist monastery is like no other, for this handful of monks live with some of the deadliest animals in the world.

They call it the Tiger Temple, and its story is the stuff of fairy tales. According to Abbot Pra-Acharn Phusit, a tiger cub orphaned by poachers was brought to the temple years ago.

The abbot cared for her and, as word spread, more people brought sickly and orphaned cubs to the temple's doorstep. Those cubs went on to have their own cubs, and nine years on there are now 34 tigers living here.

The Buddhists believe in reincarnation and the abbot feels that these tigers are his family. As he told ABC News, "I think they are my babies: my son, my daughter, my father, mother. If not in the present life, in the past life."

Buddhists also believe that animals, like humans, are sentient beings.

He has used this understanding to raise some of the tamest tigers in the world, catapulting this small forest monastery into the international limelight.

Every afternoon, up to 1,000 tourists from across the world flock to the Tiger Temple for their very own personal tiger experience.

And what they see is unlike any American zoo exhibit. Tiger Temple is hands-on, meaning visitors can pet the enormous cats and even hold their heads in their laps for photos.

"I'd seen it on the tellie before I left Ireland, so I was dying to do it when I got here. They're just so beautiful," tourist Georgina Stanley told ABC News.
Tiger Temple Draws Global Visitors

The abbot has hired more than 50 people to help care for his growing family and growing business. Margarita Steinhardt first came to the temple from Russia seven years ago and is now one of the head caretakers of the tigers.

"Somebody mentioned that there is a monastery where you can come and look at the tigers if you want. I did and they had little cubs at the time," she said. "As soon as I saw them and touched them I just lost myself to them. I asked the abbot if I could stay, and he said all right, and then I stayed on and on and on."

As with the rest of the staff, Steinhardt, who was studying conservation biology in Australia before arriving at the temple, had little prior experience working with animals. The monastery has invited some animal experts to visit, including one famous Canadian trainer, but the animals' daily care is left to the monks and other staffers rather than trained animal professionals. They turn to local veterinarians when the tigers get sick.

Tourists visiting the Tiger Temple pay big money: anything from $15 just for entry, up to $50 for the very special photograph of a tiger with its head in your lap. The temple says the money goes toward caring for the tigers (each animal eats 13 pounds of meat a day) and construction of "Tiger Island," where it is hoped the tigers will soon move to live in larger enclosures.

Most of the tourists ABC News spoke with said it was worth every penny.

"This is the reason we came to Thailand," gushed Anne, visiting from Australia. "Actually lying next to it and feeling it breathing is just fantastic!"

But not all of the visitors were convinced, and one even insinuated that the tigers, calmly sleeping in the sun while tourists petted and prodded them, were drugged.

"I don't know what they're on but they've got to be on something if they're laying around like that," said Pete, also from Australia.

It's a persistent rumor that the temple rejects.

"A Buddhist monastery seriously drugging an animal? It's very dangerous to sedate animals. When they come out from under anaesthetic they are very disorientated. They will attack anything that moves," Steinhardt said.

A recent report by wildlife organization, Care for the Wild (CWI), went further, accusing the temple of illegally trafficking and mistreating the tigers, allegations that the temple emphatically denies.

Robyn Shelby, a law student from California, has been volunteering at the temple for seven months and told ABC News, "I haven't seen anything that I don't agree with, and I am very big on animal rights. These tigers are really happy and you can see that in their interactions with people."

ABC News spent three days at the temple and did not see any evidence of drugging or mistreating the animals.

Steinhardt says that the temple has nothing to hide.

"If somebody wants to investigate the temple, come here, have a look, film what you want to film, nothing is closed off to the public here," she said. "People can go anywhere they like, they can see anything they want."

The CWI report also raises concerns about the risks of close physical contact between the tigers and the tourists. So far the temple has been lucky and no one has been hurt, but the abbot is well aware of the potential danger.

"I don't want the accident," he said. "I don't want my tiger to kill human who come to see him from far away, like United States."

To help prevent such a disaster, the temple begins taming the cubs at just three weeks old. They are taken from their mothers and brought to live with humans.

Tim Pollard is the lucky man in charge of rearing this latest batch of cubs. He worked as a mounted policeman before becoming the tigers' caretaker.

"I'm their mum once we take them away from mum," Pollard said. "We live in the cage with them."

The abbot says his long-term mission is to find a suitable piece of land and release future generations of his cubs into the wild. This is at odds with the temple's practice of hand-rearing the cubs. Tame tigers can never survive in the wild, but the temple says it has a plan.

"What they intend to do here is, once they've got the area to release them, we'll move into a breeding program where the new cubs will be taught to look after themselves and from thereon they'll teach the next generation to fend for themselves and be released," Pollard explained.

Not everyone is convinced, and some believe the temple is less about conservation than exploitation.

Edwin Wiek, the founder of Wildlife Friends of Thailand, says the temple's mission is impossible.

"It's never worked and it will never work," Wiek told ABC News. "TheTiger Temple is a zoo, nothing more and nothing less."

There are those who argue that, for the moment, tigers may be better off in captivity than they are in the wild. Mass deforestation and rampant poaching have left just 200 wild tigers in Thailand and 5,000 or 6,000 in the whole world, making them an endangered species.

Steinhardt believes the temple's tigers raise awareness about the plight of tigers in the wild.

"Hopefully, people get to love them by seeing them so close and then they go bak and if they come across any tiger conservation activity, they'll support them in the future," she said.

The abbot seems unfazed by all the criticism.

He believes people see what they want to see, and he welcomes skeptics and experts to come and spend time at the temple.

All of the employees of the temple asked ABC News to make it known that the temple actively seeks advice from people with expertise with wild animals and invites such people to spend time helping out and educating the staff.

For now, the abbot is content to continue pursuing his dream of repopulating the forests of Thailand with the descendants of his tigers. As the Buddhist proverb goes, "if we are facing in the right direction, all we have to do is keep walking."
TOP