An oasis of calm and unique Viharn

Only a short stroll from Saphan Taksin BTS station is nestled Wat Yannawa, a splendid royal monastery that dates back to the Ayutthaya period

Bangkok, Thailand -- A vibrant and bustling business district with a skyscraper-studded skyline and traffic that never seems to end, the Sathorn area might remind you of anything but a tranquil getaway spot for unwinding from your daily burdens and calming your mind. 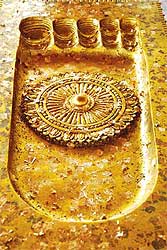 Yet only a short stroll from Saphan Taksin BTS station is nestled Wat Yannawa, a splendid royal monastery that dates back to the Ayutthaya period.

Perhaps the most striking feature of the temple complex is its gigantic viharn, unusually built in the shape of a sea-faring Chinese junk. Made entirely of concrete, the viharn was added to the temple compound by command of King Nangklao, the third monarch of the Chakri dynasty.

Due to a significant decrease in the number of old-style vessels that were gradually being replaced by Western steam ships, King Rama III was concerned that the Chinese junks that had brought much commercial prosperity to the Kingdom of Siam would become extinct and a future generation would never know what the original ships looked like. Thus, in 1824 he decided to have this distinctive junk-shaped viharn built.

The two chedis with golden finials rising from the base represent the masts of the ship. Inside the wheelhouse above the stern is the altar, where a variety of sacred objects and highly revered statues are displayed. In addition to its symbolic implication of the flourishing trade and diplomatic relations between Siam and other nations during the reign of King Rama III, the junk pagoda also depicts Buddhist visions of nirvana.

The idea behind the construction is related to the story of Vessandorn, which describes the Lord Buddha's last incarnation before attaining enlightenment, when he gave away his own children, Gunha and Charlee, to a Brahmin beggar. According to Buddhist accounts, this greatest act of sacrifice enabled him to reach nirvana and save humankind. In this respect, the junk at Wat Yannawa is symbolic of a divine vehicle that takes living creatures across the river of suffering to the shore of enlightenment.

Though the ancient ordination hall behind the pagoda looks deteriorated compared to the newly renovated viharn, its artistic value is priceless, a testament to the beauty of Thai Buddhist architecture.

The door panels boast magnificent mural paintings created during the period of King Rama III. The image of Xiaogang, the Chinese god of door-keeping, was skillfully painted on the outside door panel, whereas an image of sizeable krathong made for the royal lantern floating ceremony adorns the inner side. The exquisite window panel of the hall is dazzling, with a mural painting depicting the offering of traditional Thai desserts to the monks during the royal Sart Thai ceremony.

The 200-year-old ordination hall houses four principal Buddha images, glistening with gold. These graceful Buddha statues are all in the posture of conquering Mara.

In order to mark the 200th anniversary of the birth of King Rama III, the three-storey Tripitaka Hall and a multi-purpose building were established in 1987. The architecture of the former, whose rooftop features three Thai-style finial crests, now functions as a library where the collections of Tripitaka, together with Buddhist scriptures and Dharma books, are well kept.

The latter hall, later named Mahajessadabodin, graciously boasts five finial peaks of its own and serves a variety of purposes for the monks and the general public, including daily use for religious practice and a venue for delivering sermons on important religious days. Every Sunday it houses a Dharma teaching and meditation class as well.