Bangkok, Thailand -- A Buddhist preacher in Thailand has announced plans for new guidelines aimed at curbing the flamboyant behaviour of gay and transgender monks. 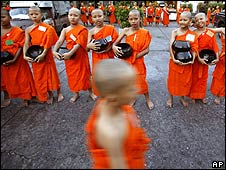 The "good manners" curriculum - the country's first - is being introduced in the northern province of Chiang Rai.

The senior monk told the BBC he was particularly concerned by effeminate activities among novices such as the wearing of make-up and tight robes.

More than 90% of the Thai population are followers of Buddhism.

The BBC's Jonathan Head in Bangkok says tales of monks behaving badly are nothing new in Thailand.

In recent years, they have been accused of abuses of their exalted position in society that range from amassing dozens of luxury cars, to running fake amulet scams, to violating their vows of celibacy, our correspondent says.

Senior monk Phra Maha Wudhijaya Vajiramedhi told the BBC he would address issues like smoking, drinking alcohol, walking and going to the toilet properly, which are all detailed in the traditional 75 Dharma principles of Buddhism, and the 227 precepts for monks.

He was especially concerned, he said, by the flamboyant behaviour of gay and transgender monks, who can often be seen wearing revealingly tight robes, carrying pink purses and having effeminately-shaped eyebrows.

Thailand has a very large and visible population of transgender men, and Phra Vajiramedhi acknowledged that it was difficult to exclude them from the monkhood but he hoped his course could at least persuade them to curb their more extrovert habits.

If successful, the "good manners" course, at the Novice Demonstration School, would be replicated at other Buddhist monasteries and seminaries, he said.