"Walking Buddha" at the centre of the universe

A "Walking Buddha" presides over the vast religious site of Buddhamonthon, known as the "Land of the Buddha"

Bangkok, Thailand -- Buddhamonthon is a precinct attached to Nakhon Pathom (nakhon means city; pathom means first), a neighbouring province to Bangkok. And what could be a better site to build the Land of the Buddha than in the first city of Suvarnabhumi (the Golden Land), which embraced Buddhism from Sri Lanka more than a thousand years ago. 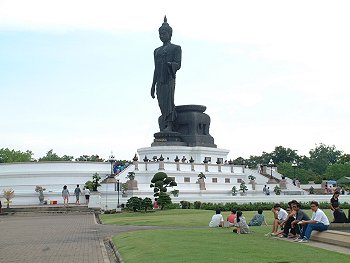 The Buddhamonthon site was built in 1957 to commemorate the 2,500th year of the existence of the Buddha. It was the mid-point of the Buddhist Era, as Buddhism under Sakayamuni Buddha was prophesied to last 5,000 years. After this period, a new Buddha under Maitreya would be born to create another Buddhist Era.

The Thais believe that the Buddha visited Suvarnabhumi in ancient times and declared that it would become the Land of the Buddha and that Maitreya would be born in Suvarnabhumi. The Buddha created some 154 footprints in Suvarnabhumi, many of which are still undiscovered, to symbolise his prophecy.

The huge Walking Buddha image, cast in bronze and gold and measuring 15.8 metres, marks the centre of Buddhamonthon. Phra Sri Sakayathospholyan was designed in 1955 by one of the best-known artists in Thailand, the late Professor Silp Birasri. Most of the first generation of modern Thai artists are students and disciples of Professor Silp, an Italian-born teacher and artist who laid the groundwork of art teaching at Silapakorn University.

Phra Sakayathospholyan raises his right foot in preparation to walk. His right hand drops loosely to the side. The left hand is held forward and raised to the chest level. The Buddha image is striking in appearance, reminiscent of the walking Buddha posture created during the Sukhothai period.

The walking Buddha posture is known in Thai as phra leela, with a beautiful feminine element in its movement and the curve of the body. You can also see some of the famous Sukhothai phra leela at Wat Benjamabophit in Bangkok, the Marble Temple, built by King Chulalongkorn.

"In general, archaeologists and historians are enthusiastic about very old objects because they represent for them the human activity of the past, while for an artist the value of an old object lies in the extent to which it is the expression of true beauty. The artist judges from an aesthetic point of view, while archaeologists and historians judge from scientific principles," he argued.

But the late Mom Chao Chand Chirayu Rajani, a literary giant of Thailand, adopted a non-iconographical approach. Instead of looking at a Buddha image from the outside, he proposed that we look from the inside, both artistically and spiritually. Then we will see the artistic beauty and feel the spiritual meaning of the Buddha image without too much why and wherefore.

The Sukhothai artists, in creating the walking Buddha posture, drew their inspiration from the Buddhist legend. During the Lent period, the Buddha once went to preach to his mother in a heaven called Tavatsinsa or the Heaven of the Thirty-Three Devata. The Buddha's mother lived in another heaven called Dusita, two levels above Tavatinsa. But the Buddha wanted to allow the celestial beings of the two lower levels to hear his sermons as well. After Lent, the Buddha returned to earth in a dramatic way. He descended via a crystal ladder, flanked by golden and silver ladders. The Lord Indra and Brahma followed him on those ladders respectively.

Montri Umavijani argued that this event had a great meaning for Buddhist art. "First of all, it was the basis of the iconography of the walking Buddha. Besides, it had a great effect on the attitude towards perspective in Thai Buddhist art. It is said that when the Buddha returned to earth, he made a miracle by opening all the worlds to view. All the levels of heaven, all levels of hell, and all continents were, therefore, laid bare and equidistant to the eyes. This partly explains why the works of Thai artists before the advent of Western influence were always two-dimensional," he said.

Although Phra Sri Sakayathospholyan is a relative newcomer to the scene and its antiquity cannot be compared to Phra Srisakayamuni of Wat Suthat, this Buddha image is of no less importance in artistic terms and spiritual value. You only have to feel it from the inside. On a full moon night, the moon lies behind Phra Sri Sakayathospholyan as if this Buddha image were the centre of the universe.