How Thailand made Buddhism its own

Buddhism and Thai culture are so intertwined that they can be difficult to distinguish. Buddhism travelled across a continent and naturalised in the rich Thai culture. Since its arrival 2,500 years ago, the Thais have made it uniquely their own

Bangkok, Thailand -- In many instances we can see the original Buddhist ideas clearly, such as the barefoot monks making their alms rounds in the early morning, or the Pali chanting in the temples. 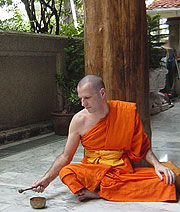 The cultural awareness of meditation, even if it sometimes seems as though few people undertake it, comes directly from under the trees of ancient India.

Other aspects are harder to fathom. People taking their new car to the temple to be blessed or offering plastic pails full of products to monks on national holidays can seem a little strange to the outside observer.

Or how about the taxis that have Buddhist icons dangling under the rearview mirror to keep them safe from accidents?

In fact, all these things can also trace their origins back to pre-Buddhist India. Many of the chants in the oldest scriptures were blessings of a sort: "May you be healthy, may you be well, may you be victorious ..."

And making offerings to religious ascetics dates back at least 3,000 years, to the time when the Aryans first settled the fertile river valleys of the Indus and Ganges.

Even amulets are not such a strange thing. All cultures have made concrete symbols for abstract concepts. It's a way of making the invisible more real and important.

A modern example might be the wedding ring, a powerful symbol of commitment and status. Buddha images, large and small, are a concrete symbol of faith and "refuge" in the Buddha.

Buddhism was originally taught to ascetic monks under the trees in the forests of India. These monks had left their homes and families and "gone forth" in the religious order to meditate and seek enlightenment.

The Vinaya - the 227 rules and regulations monks undertake - was born from this environment. Many of the rules, especially the lesser rules like not drinking while standing upright, arose from accepted norms of the culture.

It was a highly specialised environment. To survive outside its original setting, Buddhism had to adapt and become relevant to the peoples it encountered across Asia.

In cold Tibet, the robes were adapted, and an essential evening meal was permitted. On the lower subcontinent, the philosophical Indians took Buddhism out of the forests and into huge universities, with some 18 schools of interpretation springing up.

So it is only natural that Buddhism has put its own indelible stamp on Thai culture.

One of the first areas to be affected as the religion emerged from the forest setting was the arts. Alexander's Greeks are credited with carving the first Buddha images - stone symbols of people's faith and commitment. Temple walls were covered in murals depicting various stories and events in rich layers of metaphor and symbol.

For instance, in front of most Buddha images in Thai temples you can see the image of the beautiful Earth Goddess Dharani washing her hair beneath the meditating Buddha. To her left is the attacking army of Mara, the God of Delusion. To her right the demons are washed away by the water from her hair.

This representation comes from the story of Gotama. On the verge of enlightenment, the God of Delusion attacked with his armies. These symbolise the hoard of thoughts, desires and hates within the psyche. The Buddha-to-be called upon the earth as witness to his manifold good deeds of many lifetimes. Thus the distracting aspects of the psyche were "washed away".

Behind most Buddha images is another symbol. You will see the Buddha descending a three-tier staircase of emerald, gold and silver.

This represents the legend that he had sought his mother in the heavenly realms to give her the gift of dharma. After he expounded the teachings, the jewelled staircase appeared for him to return to the human world. The story symbolises gratitude and respect for ones mother.

Other areas of culture have been shaped by Buddhist ideas. Education in particular was centred on the temple, and today many Thai schools are built on temple land because of this. Healthcare was also influenced. You can see in Wat Po, for example, many recipes for herbal remedies recorded around the walls.

A more modern example is the hospice movement, largely inspired by the Buddhist tradition of contemplating and preparing for the dying process.

The programme has been used with HIV and cancer patients, and even together with treatments for skin conditions - all with good, peer-reviewed science.

Another modern application of mindfulness meditation is the ACT - Acceptance and Commitment Theory - supposedly a new "third wave" of psychology, as recently reported in Time magazine.

It is the meditation side of Buddhism that has the most appeal to Westerners today, and that is the focus of the upcoming series of talks. Buddhism offers practical tools for training the mind and spirit.

How will Buddhism adapt from this point on? One new connection that's becoming clear in the modern world is the link between physical exercise, diet and meditation. Monks, reliant on alms-food, have never been well positioned to manage a healthy diet. Nor do cultural norms see them engaged in exercise. Yet we now know that these practices all support each other.

One thing is definite, neither culture nor Buddhism have ever remained stationary for long. We can look forward to ever-new expressions of this ancient teaching.

The series of talks will be hosted by Planet Yoga on Sukhumvit Soi 23 on Thursday evenings from August 6 to Sept 24. It's free of charge. The focus is on meditation.

Find out more about it at www.Littlebang.wordpress.com, the website of the Little Bangkok Sangha ("littlebang"), which was co-founded by Phra Cittasamvaro Bhikkhu. The monk was ordained in Thailand in 1996. He has a BA in Buddhist psychology from Mahachulalongkorn Rajavidyalaya University.