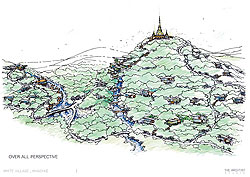 << The prospective view of the White Village, a 200-million-baht project with a dhamma centre aimed exclusively at Buddhists. Some 99 residential units will be built, with plots ranging from 1 to 15 rai and priced at about 800,000 baht per rai, excluding houses, which will cost 2-10 million baht each depending on size and style.

White Village is located on a 450-rai plot in Pak Chong district. The project will include facilities such as a dhamma centre and library, a hotel, a vegetarian and a health centre.

"Buyers must be followers of dhamma or should practise meditation, as my intention is to create a peaceful community where people can share with their neighbours and find sufficiency in their lives," said managing director Nopphakao Chaiyaburin, who owns S.K.N. Technology, a construction firm responsible for several major projects such as Bang Pakong power plant and Amornphan Village.

Some 99 residential units will be built, with plots ranging from 1 to 15 rai and priced at about 800,000 baht per rai, excluding house. Houses will cost 2-10 million baht each, depending on size and style.

The company took more than 10 bookings when it was launched yesterday, said Tanawat Wongtanutam, a Dharma Land executive board member.

The company expects to close sales within a one-year period.

Buyers will be required to build houses within one year of purchasing the plot. The design must be approved by the developer, who will also provide the contractors, said Mr Tanawat.

The houses are modern, with designs blended with nature, and every unit will feature a meditation room, he said.

At present, plots will be sold with a Por Bor Tor deed, a land document which can be upgraded into a title deed in the future.

Construction is planned to start next February and each house will be built within six months.

The 40-room boutique hotel will require about 50 million baht of investment. The 20-rai hotel will focus not only on dhamma practitioners but also health enthusiasts. Construction of the hotel will start by the end of next year and should be finished by 2012.

Mr Nopphakao said he has studied dhamma since he was young and wants to promote Buddhist teachings among Thai people to help them attain peace of mind.

He still teaches dhamma today and once had a shop called "Car Care-Coffee-Fortune Teller" in Soi Senanikhom 1, which became the centre of a community of dhamma enthusiasts.