Buddhism in Thailand - Time for monks to let go

Bangkok, Thailand -- Now that not many Thai men want to become Buddhist monks, isn't it strange that when women want to be ordained, the answer from the clergy is a fierce, firm "No"? 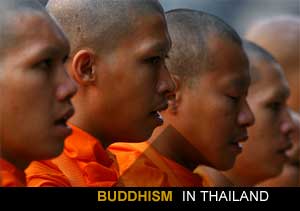 When misconduct by clerics is rampant from top to bottom, isn't it sad that the Council of Elders insists on closing its eyes and ears, clinging tightly to its feudalistic system and powers?

We can go on and on about how our feudal clergy has become an oppressive system. Or how patriarchy, when nourished by an unhealthy approach to celibacy, has turned into misogyny within the clergy.

We can complain to no end about how the clergy have gone wrong. But is it only because the problems are real? Are there also other reasons at play, like our desire to have someone to blame for the moral abyss that is also of our own making?

True, the clergy need to shape up. But like in all situations we are unhappy with, we always think the other party needs to change, not ourselves. But aren't we also morally responsible for creating a society that is non-exploitative towards others, ourselves and Mother Nature?

Doesn't Buddhism teach that real change starts with ourselves?

To trigger change, maybe we should start by asking why we have no second thoughts about passing our moral responsibility to the monks.

Dharma teacher Santikaro Larson has an interesting observation. "The Thai society is monk-centric," said the former Theravada Buddhist monk of 19 years. He is a disciple and principal translator of the late reformist monk Buddhadasa Bhikkhu. Believing that the monkhood is the holiest form of life, the laity ignore the facts that monks are mere humans who are struggling with many problems that come with life in the robe, particularly celibacy, he observed. The repercussions of putting monks on a pedestal are harmful, indeed.

For example, we focus on monks' outer form of respectability because it is in line with our idealised image of clerical purity. We keep pampering monks with materials and status of authority, which plunges the monks deeper into the trap of ego and attachment.

Meanwhile, this monk-centric mentality allows the householders to avoid their own duty to cultivate mindfulness of the transience of life, and to integrate the principle of non-exploitation into their life and work as Buddhists should.

Indeed, had the laity been true to the teachings, the monks would not get away so easily with their misconduct and gender prejudices.

How to overcome this monk-centric mentality that hurts both the clergy and the lay communities?

It is worth remembering that the Buddha has never said that his system of teachings depends solely on monks. Instead, he says it depends on the four-fold Sangha, namely the communities of practising monks, their female equivalent or Bhikkhunis, and the strong communities of observant lay supporters, both male and female.

Given rife monastic misconduct, the clergy's refusal to ordain women, and the lay Buddhists deeply lost in the world of materialism driven by greed and violence, we should not be surprised at the current state of Buddhism in Thailand.

But it is not all bad news. A large number of dharma and meditation teachers nowadays are lay disciples with spiritual authority.

Meanwhile, the internet and modern communications technology have enabled the laity to study the Buddhist canon, listen to dharma talk, or set up online communities to help one another. The time of monks' monopoly on Buddhist teachings is over.

The emergence of lay dharma teachers in greater numbers. The reinstatement of the Bhikkhuni order despite the elders' frowns. The growing interest in Buddhist spirituality among householders. The message is clear: the monk-centric mentality is crumbling.

Instead of feeling threatened, the clergy should work with the other three Sanghas to bring dharma back. They should welcome the opportunity to return to the original mission of monkhood: letting go of all forms of attachment and prejudice.

Reacting with hostility only means that they still have a long way to go on their spiritual journey.