BANGKOK – A growing number of people are trying to tidy up the crowded façade of their cluttered lifestyle — they're tackling the congestion at its root by exploring a simpler yet richer path: studying Buddhist meditation and, in some cases, being fully ordained as a Buddhist monk or nun. 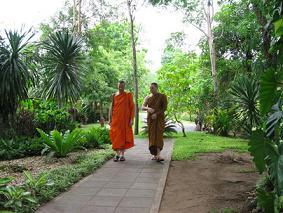 While one can manage this in almost any big city, many people aren't aware that the process is gaining popularity in Asia, where the religion was born and remains the dominant moral philosophy.

One of the most popular places for this undertaking is Thailand, where many people subscribe to Therevada Buddhism, a school that claims direct lineage back to the Buddha himself. It emphasizes wise reflection, meditation and the belief that one of the main causes of human suffering is craving, or the desire to amass wealth.

"The more you give up, the more freedom you have," says Pandit Bhikkhu, a Brit who was ordained as a monk in 1996 and one of the most visible westerners in Thai Buddhist circles. Monks, a moral pillar of Thai society, live a modest life — an average day begins around 5 am, and follows a pattern of meditation, studying and various temple-related duties. Most Thai men are expected to be ordained at some point, earning respect from their community and good karma for their family in return for their oblation.

"I don't miss the western lifestyle, although I do miss the food sometimes," he laughs. "Some take to it and remain a monk for years, while others can't wait to get back to their car and girlfriend."

But being ordained is a long process that requires deep commitment, and the English monk recommends experiencing a meditation retreat first.

"Retreats are organized and well planned, so it's a more accessible way to get an idea of the things that Buddhism and monkhood offer."

Steve Weissman, a former student of and now teacher at Wat Khowtam on the popular island of Ko Phangan since 1988, says, "The majority of our guests either want to learn more about themselves or are interested in what the Buddha taught. Many people have become aware of certain aspects of life that they consider unsatisfactory and would like to know how to lessen or solve these problems."

Life at the hilly retreat among a thick jungle landscape is austere: participants sleep in dormitory rooms on straw mats and spend their time in near-silence, meditating in groups and honing their skills via one-on-one conversations with the teachers. "We have many students from around the world who return to continue their development and pass on what they have learned to their children, family and friends," says Weissman.

Thailand has many similar retreats that cater to Thais and foreigners alike, from the southern sandy beaches to the lush northern capital of Chiang Mai, and even in and around the noisy, fast-paced capital of Bangkok.

One such place is Wat Prayong International Meditation Centre, located 30 minutes outside of Bangkok among an endless expanse of banana trees and deep green rice paddies. Austrian Mae Chee Brigitte has been at this temple since she was ordained as a nun in 1990 after trying meditation on a whim and feeling a deep and ethereal connection to the philosophy (like Bhikkhu, Mae Chee is a religious title).

"I try to teach my students not only meditation within the temple, but to develop mindfulness in all their daily activities so that they can apply it at home, because mindfulness leads to wisdom. If you are able to be more mindful of your daily existence, you learn to let go of useless and negative thoughts, giving you control over your emotions and allowing an easier path to happiness."

Mae Chee Brigitte's tutelage is free for those who are interested, but donations are always appreciated. Like Wat Khowtam, prospective students should send an email rather than simply show up, and may stay as long as they wish as long as they continue to practice meditation. Some have followed the path of their teacher and have remained in Thailand to study.

"Two of my disciples have been in the monkhood for over ten years, and one even lives in a cave in Suphanburi province," she says.

However, such an extreme lifestyle shift isn't for all tastes, so a more scholarly approach to Buddhism is another option. Tony MacGregor, a retired 64-year old from Nanaimo, B.C, is in his second year of an M.A. program in Buddhist studies at Bangkok's 122-year old Mahachula University.

"I tried meditation on the advice of a friend and found it incredibly helpful, which led to Buddhism and eventually, Thailand," he says.

Classes at Mahachula are taught in English, and lay-students and orange-robed monks alike listen to lessons on Pali, Modern Science and Buddhist Research Methodologies.

"Most of my 20-odd classmates are monks from neighbouring countries. It's not as stern as you might think — there's a fair amount of laughter and horseplay in class, but they're serious about earning their degree," he says.

But meditation remains the doorway. "Once you learn how to meditate properly, it stays with you forever," says Pandit Bhikkhu. "You can meditate anywhere because the base of your happiness is inside you. If you're married, in prison, in a hot country, cold country, rich or poor, it doesn't matter. Happiness comes from letting go."

JUST THE FACTS: There are numerous places that offer meditation retreats, and plenty of online communities where you can find advice, stories and contacts.

Monk for a Month will take all the guesswork out of the process and provide you with a support network, although their programs aren't free. http://www.monkforamonth.com