Can saffron be red in Thailand? 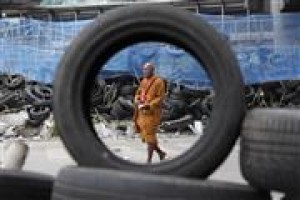 Just about every night, rumours sweep the the sprawling encampment of tents, sounds trucks and makeshift stalls that a long anticipated crackdown is imminent. The men stare at the three-metre barricades made of tyres, bamboo poles and rubble that surround much of the encampment, about the size of a large city park, waiting to pelt soldiers armed with  assault rifles with pellets from their sling shots and thrusts of their bamboo spears.

The monks are there for moral support, and to receive “merit” from the red shirts, who have occupied some of the most expensive real estate in Thailand for the past seven weeks in their campaign for early elections.  “Making merit” involves giving an offering — food, some spare change to a monk — perhaps in the hope of a more accommodating afterlife, should death suddenly intervene. As it well could on the barricades when you’re fending off  automatic weapons fire with a bamboo stick.

But the presence of Buddhist monks at the rallies — including some carrying sharpened sticks –  is unsettling to many in Thailand, where monks are supposed to be politically neutral. They are not even supposed to vote.  Amnart Buasiri, director of the Secretariat of the Sangha Supreme Council, the clergy’s governing body called on police to arrest monks for taking part in the red shirt rallies, which are illegal under emergency decrees imposed after the protests turned violent three weeks ago.

It should come as no surprise that monks are joining the red shirt movement (though it’s difficult to check their authenticity). They often come from the same social strata as the protesters — the rural poor and urban working class.

Their hero,  former premier Thaksin Shinawatra, ousted in a 2006 coup and now living abroad to avoid jail on a corruption conviction, is a devout Buddhist aligned with the powerful Dhammakaya movement.

During the Asian financial crisis of 1997-98, this monastic community famously collected gold jewelry to enable Thailand to pay off its debts to the IMF. Dhammakaya was also major force in the formation of the Thaksin’s populist Thai Rak Thai party, which has banned.

The Thai political divide that broadly pits this underclass against what they call an establishment elite is beginning to be reflected in religion. Prime Minister Abhisit Vejjajiva’s government relies for support on the Muslim-dominated provinces of southern Thailand along with an establishment that includesBuddhist leaders appointed by the crown.

On Friday, the security agency in charge of dealing with the political crisis (CRES) said a rocket-propelled grenade attack last month near the Defence Ministry actually targeted the Temple of the Emerald Buddha, part of the Grand Palace complex in Bangkok, which historically has functioned as a kind of personal chapel for the royal family.

The government has been stepping up accusations recently that the red shirt movement has republican leanings and some of its leaders are part of a network to overthrow the monarchy in their drive to upend the establishment. Thered shirts deny they are against the monarchy.

Thai monks have been less politically active than in other Asian nations where Buddhism is strong –in neighbouring Myanmar, for instance, monks have often been at the forefront of protests against the junta there.

That could be changing. Some of the dozen or so monks staying in the red shirt encampment say they are there to maintain an atmosphere of nonviolence and upholdBuddhist principles.

If the army moves in they say they will stand in front of the red shirts and plead for no bloodshed.