Bangkok, Thailand -- In a quiet corner of a Buddhist temple in Bangkok, an impromptu shrine has been created. 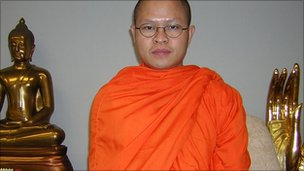 This is the temple morgue, where bodies are stored before being cremated.

But the shrine is unusual.

The offerings have been left to ease the transition of restless souls from this life to the next: the souls of 2,002 aborted foetuses that were recently discovered behind the locked doors.

The remains are widely believed to have come from illegal clinics.

Abortions are only permitted in Thailand in cases of rape, incest or where the mother's life is in danger.

But official statistics suggest around 300,000 abortions are carried out each year, the vast majority in back-street clinics.

The gruesome discovery of so many foetuses in the grounds of a temple has prompted debate about an issue usually considered taboo.

But on the outskirts of Bangkok, in a compound of buildings surrounded by gardens, the sense of shock and moral outrage is muted.

This is the headquarters of the Association for the Promotion of the Status of Women.

The organisation provides shelter and advice for women struggling to cope with unexpected pregnancies.

Maytinee Bhongsvej has been working here for almost 20 years, first as a volunteer, now as the director. In all that time, she has seen little change.

Young women in particular, she said, are often ignorant about sexual matters so when they accidentally become pregnant, there is a tendency to panic.

"They do everything they can think of to get rid of it," Maytinee said, in a calm voice that belied her evident frustration.

"They walk into things deliberately, have accidents deliberately, fall down the stairs, get a friend to kick them in the tummy, all because they don't know what to do." 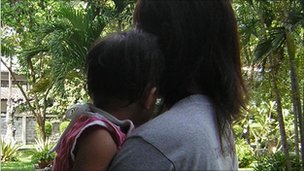 Noi, an orphan, says she received no guidance from school teachers or doctors  >>

Noi, not her real name, and her one-year-old daughter Noi, an orphan, says she received no guidance from school teachers or doctors

She and her boyfriend at the time did have condoms but did not want to use them. They thought they would be fine.

A year later, she is living at the centre with a one-year-old daughter curled up in her lap.

Noi's boyfriend told her he wasn't ready to look after a baby and that she should have an abortion.

"But I was so scared," Noi said, "and I didn't have any money and I didn't really want to have an abortion.

"My boyfriend said if I kept the baby, he would leave - and he did. He went off with someone else."

A friend told her about the women's centre. Noi is an orphan and all the advice she sought or received up to that point had been from her peers, not from school teachers or doctors.

It didn't even occur to her to talk to an adult.

Noi now plans to finish school and look for a job. But as a single mother, she knows her options may be limited in what is still, in many ways, a very conservative society.

But Thailand is also a society full of contradictions. Parts of central Bangkok reveal the seedier side of life.

The bar stools are occupied by women waiting to entertain male customers.

Bangkok has a reputation for being the city where anything goes. Sex is for sale and all tastes are catered for.

There are pole-dancing clubs next door to lady boy shows and Western men looking for younger Asian girlfriends.

It is all here and you don't have to look very far. Yet sex is rarely spoken about in Thai schools or within families.

In fact, those that did speak were very upfront. It would be good if people talked about sex more openly, one said. But in Thai culture, that doesn't happen.

"One group may want to start a discussion to make people more aware but there's always another that says it's not the right time for kids to learn about these things," she said.

"But all the girls here know how to look after themselves."

In the middle of the quadrangle of bars where she was talking was a large Buddhist statue.

Throughout the evening, women stopped to offer prayers before disappearing into the clubs and bars to start work.

Religion is often cited as the driving force of conservatism in this predominantly Buddhist nation. But there is one leader of the faith who thinks it may be time for a new approach.

In a room filled with his books and DVDs, a bespectacled Phramaha Vudhijaya Vajiramedhi sat in a chair while followers respectfully positioned themselves at a lower level on the floor.

Buddhists are fundamentally opposed to any kind of killing, including abortion.

"We need to adjust the old-fashioned way of teaching morality," he said.

"We can't just keep saying that abortion is a sin, abortion is bad karma. We need to understand that when a woman decides to have an abortion, it has something to do with a lack of sex education or she might have problems at home.

"Monks must do more than telling people it's a sin. We have to find solutions too," Phramaha Vajiramedhi said.

That sentiment is shared by Maytinee Bhongsvej from the Association for the Promotion of the Status of Women. But she wants more practical, as well as spiritual, help to be made available.

Ms Maytinee said: "If a woman decides to abide by the law and keep her baby knowing that she is not really ready for that, once she delivers the baby, who extends their hand to help?

"If you don't want legal abortion, you have to have a better system to look after the women who go through with the pregnancy."

There is clearly much soul-searching still to be done.

But there is perhaps one positive outcome from the terrible discovery of the temple foetuses.