Pattaya, Thailand -- Mr. Anton Avdanin (42), a Russian businessman, had a premonition of seeing an image of a Thai Buddhist monk, leading him to fly to Thailand to research further. After meeting the monk, Mr. Avdanin first carefully observed the monk’s actions for 2 years. 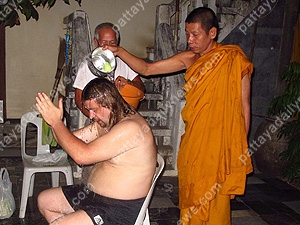 He watched the monk making the fortune ceremony for the Thai disciples until one day he found the courage to ask the monk about his business’s aspect. Mr. Avdanin later became successful in doing new business after following the monk’s advice. Now Mr. Avdanin has taken a ceremony of exorcising, fate making, and holy bathing as is common for Thai disciples. He has also been behaving in the ways of Buddhism and practices meditation regularly.

This story was uncovered on 20th February 2011. Reportedly, from the belltower, Thepprasat Temple “Toathan Temple”, Moo 4, Sattahip, Chon Buri in the evening, a group of Russian people had come to meet Master Bunsong Junthimo (Ajan Eed), a deputy abbot in order to experience the fortune ceremony. The reporter discovered Mr. Anton Avdanin (42), a Russian businessman was having the ceremony with his 4 Russian friends who allowed him to interview and take photographs.

Mr. Avdanin explained 4 years ago, he travelled to Pattaya seeking a Thai monk depicted in his premonition and dreams. Luckily he met a Thai man who was a disciple of the monk described. Having gained information to find the temple, Mr. discovered a monk he was looking for. For the first 2 years, Mr. Avdanin quietly watched the monk’s activitiess. During his 4 visits to Thailand, he saw several Thai people come to the temple to have the fortune ceremony.

After this 2 years’ observation, Mr. Avdanin decided to ask the master monk about the aspects for doing new business in his own country. When Mr. Avdanin went back his country, he followed the advice given and his new business proved to be very successful. Then he travelled back to Thailand twice more in the 3rd year. This time he pleasingly decided to demonstrate respect to the master monk so he got into the fortune ceremony of exorcising, fate making, and holy bathing prepared by the master.

Mr. Avdinin added that with believing in the monk, it followed that he should start to behave like a Buddhist by praying and practicing mediation. That resulted in his having dreams showing the master giving him herbal medicines when he was sick and his condition surprisingly improved. The amazing events were remarked to his friends, leading them to travel with him to Thailand this time.

Master Bunsong Janthimo revealed that he just managed the ceremony in the Buddhist way for general disciples as usual. The master had no idea how the farang came to find him. He had been informed later that Mr. Avdinin saw him in his premonition. Later Mr. Avdanin started to follown the teachings of Buddha  and to behave accordingly. In the 3rd year of meeting a master, he wore the white robe while meditating and having the fortune ceremony prepared by the master.  Mr. Avdanin believed that it caused him to have a successful life so he invited friends to come along the following year . On the 4th April 2011, Mr. Avdanin will come back to see the master Bunsong again.