Orphanages are often run as businesses, the children being the assets.

Siem Reap, Cambodia -- Dozens of orphanages in Cambodia, including some run by Australians, have been accused of exploiting children to attract donations. 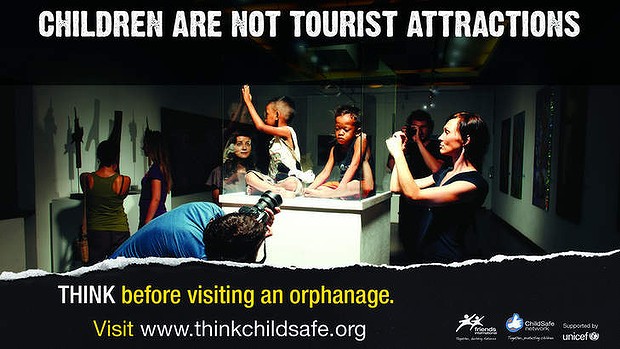 A campaign poster used in Cambodia. Visiting orphanages and volunteering in Cambodia is dangerous for children as they become emotionally attached to foreigners and feel abandoned when they leave, says Friends International chief Sebastien Morat.

The government in Phnom Penh is cracking down on the booming multimillion-dollar orphanage industry after investigators discovered shocking abuses of children and a list has been compiled of centres targeted for raids and closure.

Children in one orphanage told investigators how they were forced to crawl while they were beaten with sticks and had to eat rice from the ground as punishment for failing to recite Bible psalms, according to SISHA, an anti-trafficking and exploitation organisation working with government agencies in Phnom Penh.

''They told me to go over there and choose which one I want,'' Mr Meldrum said.

Investigators say Australia has a greater involvement in Cambodia's orphanages than any other nation through Australians running them directly, volunteering or donating.

About 72 per cent of the 10,000 children living in Cambodia's estimated 600 orphanages have a parent, although most are portrayed as orphans to capitalise on the goodwill of foreign tourists and volunteers, including thousands of Australians, research shows.

Up to 300 of these centres are operating illegally and flouting a push by government and United Nations agencies for children to be reunited with their parents.

The largest Australian-run centres include Sunrise Children's Villages, Hagar, Hope for Cambodian Children and Kampuchea House. Fairfax Media is not suggesting any of these homes is being investigated.

One of the first orphanages investigated was the Love In Action centre, an Australian-run orphanage in Phnom Penh, where there were allegations of children being beaten and neglected.

The centre's 71-year-old Victorian founder, Ruth Golder, is under investigation after 21 children were taken away from her centre in a raid on March 22. She strongly denies any abuse took place.

The orphanage, which has links to the Christian Outreach Centre in Australia, had operated illegally for years from donations from Australians.

There is growing criticism in Cambodia and other developing countries about so-called ''orphan tourism'' and ''volunteer tourism'', where thinly disguised businesses exploit both tourists and volunteers.

Visitors who have undergone no background checks can walk into dozens of Cambodia's orphanages and be left alone with children who are being described by child welfare workers as Cambodia's stolen generation. Donors also take children away for outings - sometimes overnight - leaving them open to sexual abuse, investigators say.

In the Children's Umbrella Centre Organisation orphanage on the outskirts of Phnom Penh, children were lined up last year and strangers who had donated to the centre were invited to pick any before driving away with four, investigators say.

The centre, which had an open sewer in a compound where children slept, has been closed.

While many orphanages are well run, enforce child protection policies and have strict rules for visitors, almost all are largely unregulated in a country where state institutions are weak and no qualifications are required to set up an orphanage or children's centre.

On the streets of Siem Reap in north-western Cambodia, children playing traditional instruments are led by men with signs declaring ''support our orphans''. Anyone who donates is invited to visit nearby orphanages.

''We believe this is dangerous because the children are not orphans and should not be there in the first place,'' said Sebastien Marot, executive director of Friends-International, a non-government organisation conducting a campaign to warn tourists and volunteers that children are not tourist attractions.

Mr Meldrum said unscrupulous orphanage operators had adopted a business model where the centres got more money from international donors if they had more children.

He said orphanage recruiters would approach poor, often rural, families promising the centre could offer their children education, food, clothing and a chance for a better life.

''There are many reports of cash transactions for the child, though it is usually referred to as a donation to the family,'' he said.

Several international studies have found that children should be living in their communities with family members, relatives or foster families except in extreme circumstances.

A study by Save the Children found that institutional care should only be used for children as a ''last resort and only then if it is of a high standard and in the best interests of the individual child''.

Studies also show that in most orphanages children are taught a foreign language, religion and Western culture that leaves them struggling to cope in Cambodia's Buddhist community when they are eventually released, often when they turn 18.

Mr Marot said Cambodia was particularly vulnerable ''because it is suffering from the victim syndrome where everyone thinks the country is still coming out of war. Everyone comes here with this attitude towards Cambodia as this victimised country where all the children are in miserable and horrible situations, which is not the case any more.''

But Geraldine Cox, who runs two Sunrise Children's Villages in Cambodia, said while the Friends' campaign had merit it ''does not take into account the many orphanage centres which are well run and rely on visits by tourists to survive''.

She said visitors should be discouraged from visiting centres where receipts for donations are not given, photo identifications are not requested and where a visitor cannot see annual financial reports.

American missionary Cathleen Jones came to Cambodia 20 years ago to run an orphanage with 120 children but soon ''started realising these kids had parents and families and they wanted to be with them''.

Now her Children In Families organisation works to find Cambodian homes for children through kinship or permanent and long-term foster care for children who cannot be reunited with their parents.

''If there is no imminent danger to the child he or she should not be removed, even if the family is dysfunctional,'' Ms Jones said, adding that many orphanages refused to release children once they were in their care even if a family environment was available.

Mr Marot said the people who ran some orphanages ''keep the kids looking poor … badly dressed in order to attract sympathy from you in order to get your money.''

''It's a lucrative business. The children are the assets,'' he said.

Volunteer placement organisations promote volunteer tourism as a way for travellers to ''make a difference'' and have experiences that are ''life changing and rewarding''.

Volunteers pay several thousand dollars for a two-week visit, while some stay many months.

But Mr Marot said visitors were doing things with children at the centres that were banned in their own countries.

''Imagine if a busload of Chinese turned up at a school in Australia, played with the children, spoke to them in Chinese, pushed them to eat rice and fish and took photographs with them and splashed them all over Facebook?'' Mr Marot said.

''The parents would go berserk.''

Cambodian government agencies, including the Ministry of Social Affairs, and SISHA late last year set up a committee to identify, investigate and close harmful unregistered orphanages, while adopting guidelines for standards of residential care in registered centres that are comparable with those in Western countries.

They have compiled a list of centres they plan to raid and close.

Jenny McAuley, chairwoman of Hope for Cambodian Children Foundation, which runs an orphanage in Battambang province for AIDS-affected children, welcomed the government's crackdown on unregistered orphanages and the push to return children to their parents, saying it ''rightly articulates that the best place for children to grow up is in their families and local communities''.

Ms McAuley, who has worked in children protection for 30 years, said it was ''quite arrogant for people from a developed country to go to a developing country and set up a service without reference to the government about what they are doing''.

''I think government agencies are quite right to be annoyed about it … It's a form of colonisation,'' she said.

May, 21, who sells books to tourists on Phnom Penh's riverfront, spent four years in a centre for abused children in the city.

She said it was good - she learnt to speak a little English - but conditions were strict and she was allowed to visit to her parents only about twice a year.

''I was very sad for all that time, because I missed my family.''