Phnom Penh, Cambodia -- Hundreds of Buddhist monks marched through Phnom Penh on Friday, demanding an end to construction in and around the Buddhist Institute, which is quickly being surrounded by structures and construction sites belonging to the NagaCorp. 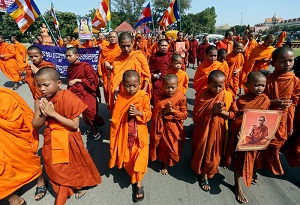 << Hundreds of Buddhist monks march through Phnom Penh on Friday to demand an end to construction in and around the Buddhist Institute. (Siv Channa/The Cambodia Daily)

In May, the Buddhist Institute’s front gate was demolished to allow underground construction to go forward and more recently, a raised 30- by 100-meter concrete slab has been laid by a private construction firm in the middle of the institute compound, fueling concerns that the land has been sold for development.

About 200 monks from the Independent Monk Network for Social Justice attempted to deliver a petition to the Royal Palace Friday asking for King Norodom Sihamoni to ensure that the Buddhist Institute remain intact, but were blocked by about 50 riot police stationed near the palace.

“We have asked the King to order a stop to rental of the land in the Buddhist Institute,” said But Buntenh, head of the Monk Network. “Some officials have sold property of the King and no one is taking any action. Is this respectful to the King?”

A Royal Palace official eventually came out to meet with the protesting monks and accept their petition, which calls for an end to construction on the institute grounds and the removal of the concrete structure now at the center of the compound.

At the National Assembly, the next stop on the march, the monks were met by opposition lawmaker Yem Ponhearith, the head of the parliamentary Commission on Education, Youth, Sports and Religious Affairs.

“We will be inviting His Excellency Ministry of Cults and Religion Ming Khin to answer questions on the afternoon of [October] 9 related to the Buddhist Institute,” Mr. Ponhearith told the monks.

Seng Somony, spokesman for the Ministry of Cults and Religion, declined to comment on the state of the Buddhist Institute.

The institute’s acting director, Sar Sokny, also declined to comment, directing a reporter to a statement from the Ministry of Cults and Religion earlier this year stating that construction in the institute was only temporary and that the land had not been sold.