Phnom Penh, Cambodia -- Cambodia's first Buddhist monk to re-enter the religion after the fall of Pol Pot's Khmer Rouge regime has been elevated to the kingdom's highest position in the religion by King Norodom Sihamoni, according to letters released Wednesday. 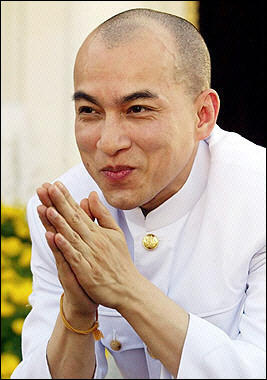 In a letter released Wednesday, Prime Minister Hun Sen congratulated Tep Vong on his new appointment to a title which translates roughly as "Great Monarch Chief Monk", saying he had "sacrificed everything to Buddhism and Khmer society" and lauding his work in ensuring the stability of Buddhism in Cambodia, DPA reported.

King Sihamoni issued the decree to promote Tep Vong on April 29, according to documents made available to the media Wednesday.

Tep Vong is recognised as the first Buddhist to rejoin the monkhood in 1979, almost immediately after Vietnamese-backed troops overthrew the Khmer Rouge's bloody Democratic Kampuchea regime.

The nation's other Buddhist master, Bou Kry, returned to Cambodia with former king, Norodom Sihanouk, in around 1992 after the Paris Peace Accord was signed in 1991.

Religion was abolished by the Khmer Rouge when it took power in 1975 and thousands of Buddhist monks are numbered amongst the up to two million Cambodians who died of starvation, disease, overwork, torture and execution under that regime.

Today, an estimated 95 percent of the Cambodian population again call themselves Buddhists, and Buddhism is the national religion.