Phnom Penh, Cambodia -- Cambodian monks may be allow to watch the football World Cup, but asked to be calm, local media reported on Friday. 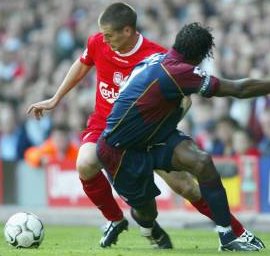 << The World Cup 2006 fever in Germany grips the world. including Buddhist monks in Cambodia

With the tournament kicking off in Germany on Friday and being broadcast live on Cambodian television, Buddhist monks have been officially permitted to watch the games, but rules have been introduced to regulate their emotions, The Cambodia Daily reported.

Supreme Patriarch Non Nget, chief of monks in Phnom Penh, was quoted as saying that monks can watch the televised tournament but they must do so silently.

"Screaming and cheering with an angry face or happy feeling are the acts of street kids," he said. "Laughing, cheering or making noise inside the pagoda violate Buddha's rules."

Though watching matches in silence and solemnity on TV is allowed, Non Nget said that betting on the games would not be tolerated. "If I found any monk betting money on a football match...I might fire him from the pagoda," he warned.

However, some chief monks said that their pagodas would not follow Non Nget's suggestion, saying that the watching sports challenges the discipline monks are required to learn, and worrying that they (monks) would be unable to control their emotions.

Young monks interviewed at pagoda of Wat Lanka on Thursday said they felt monks should use television only as a source of news and education rather than entertainment.