The speaker of Cambodia’s Senate, in view of the next municipal (2007) and national elections (2008), highlights the importance of Buddhist religious’ social role. Over the years spiritual leaders have insured that monks to do not participate in voting to avoid “temptation”. 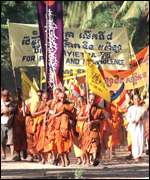 Phnom Penh, Cambodia -- The issue of Buddhist monks’ abstaining in elections is the limelight again. Chea Sim, speaker of the Senate and leader of the ruling Cambodian People’s Party, stated that the men religious have the right to vote in the next municipal and national elections, but his view runs against what some Buddhist religious leaders view as “temptation”.

In speaking at the 15th Annual Congress of Cambodian Buddhist Monks, he said that monks have a perfect right to vote. At the same time, he urged them to use their social position “to teach morality and promote social development”.

The speech by the speaker of the Senate threatens to reignite a debate over an issue that had already flared up before the last national elections in 2003. At that time Tep Vong, Patriarch of Cambodian Buddhists and leader of the Mahanikaya Buddhist school, had stated that monks should abstain from voting.

Although Cambodian monks have the constitutional right to vote, debate has raged about their role in politics and whether they should be above political opinions or not.

Some Cambodians remember their positive role in the resistance against French colonial rule, whilst others worry that monks in crowded polling booths are at risk of temptation and in danger of breaking taboos such as accidentally touching women.

Supreme Patriarch Tep Vong has refrained so far from commenting on the issue or giving monks any directive for the upcoming municipal elections in April 2007 and national elections in 2008.